Why do markets keep rising? Even Nobel winner Thaler can’t explain it

Stocktake: Absence of stock market volatility at a time of global uncertainty a mystery 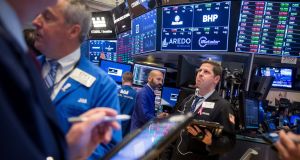 Traders work on the floor of the NYSE. Photograph: Michael Nagle/Bloomberg

The world’s biggest stock market has risen every month in 2017. If the S&P 500 rises again in November and December, it will mark the first calendar year in history where stocks rose in all 12 months.

Why do stock markets keep rising?

Michael Bloomberg, the billionaire founder of the self-named financial services company, is at a loss to explain it. “I cannot for the life of me understand why the market keeps going up,” he said in September. Newly crowned Nobel economist Richard Thaler is similarly puzzled. “The unbelievably low volatility in a time of massive global uncertainty seems mysterious to me,” Thaler said last month.

“Nothing seems to spook the market”, even though “we seem to be living in the riskiest moment of our lives”, said Thaler. “I admit to not understanding it.”

Both the S&P 500 and the MSCI World index have risen some 17 per cent in 2017. Such returns are strong if not strange – double-digit returns are perfectly normal in a bull market.

What is strange is the complete absence of volatility, the fact stocks seem to have forgotten how to fall, instead hitting all-time high after all-time high. The S&P 500 has fallen by 1 per cent or more on only four days this year – the smallest number since 1964. The biggest peak-to-trough decline has been just 2.8 per cent, the shallowest on record. The last time stocks suffered a 5 per cent drawdown was in the aftermath of the Brexit vote in June 2016.

Prior to 2017, the Vix, Wall Street’s so-called fear index, had traded below 10 on only nine trading days in history; this year, it has traded below 10 on 30 occasions, hitting multiple record lows in recent months. To quote Ben Carlson of Ritholtz Wealth Management, “it feels as though volatility has been outlawed”.

This extraordinary calm comes against a backdrop of geopolitical uncertainty exacerbated by Donald Trump’s chaotic leadership.

Senator Bob Corker, a Republican who last year supported Trump’s presidential bid, has warned the White House resembles an “adult day care centre” and that Trump is setting the country “on the path to World War III”. Rex Tillerson, Trump’s secretary of state, is reported to have called Trump a “moron”. Almost everyone, it appears, is concerned – but not markets.

In a recent BusinessWeek article, Credit Suisse strategist Mark Connors said the firm’s clients remained utterly nonchalant after North Korean tensions erupted in August. “Two rockets flew over the land mass of Japan and nothing happened,” he said. “There were no calls. That’s absolutely crazy.”

Or is it? Although there has never been a US president like Trump, it’s fair to say geopolitical concerns are not new. Indeed, they are a constant, and history shows geopolitical-induced sell-offs tend to be very short-lived affairs. Investors can model cash flows and inflation and economic growth, Schroders strategist Jon Mackay commented recently, but they cannot model geopolitics.

Investors are heeding that advice. Rather than be distracted by Trump’s endless political shenanigans, they’re focusing on a global economy that is humming along nicely. The economies of all 45 industrialised countries tracked by the Organisation for Economic Cooperation and Development (OECD) are expected to grow this year. The variability of economic growth across those 45 countries is the lowest in at least half a century – a “perfect symphony”, says Bank of America Merrill Lynch. That’s echoed by JP Morgan, which says the percentage of countries experiencing major economic expansion “is about as good as it can get”.

Accordingly, stocks are rising everywhere, not just in the US. Japanese equities are at 21-year highs. Emerging markets have gained some 50 per cent since bottoming in February 2016. South Korea’s Kospi index is up almost 25 per cent this year, despite the threatening sounds coming from its northern neighbour. European stocks are gearing up to have another go at taking out the level that marked major market peaks in 2000, 2007 and 2015.

Bears would counter by saying that valuations look challenging, but significant market declines typically demand a catalyst. Eight of the last 10 US bear markets have been triggered by recessions, but there is no hint of an economic contraction anytime soon.

According to Citibank’s global bear market checklist, just two of the 18 indicators associated with bear markets are flashing red, compared to 17.5 at the 2000 market top and 13 at the 2007 peak. Merrill Lynch’s latest monthly fund manager survey shows global investors envisage “above-trend growth and below-trend inflation” – the ideal “Goldilocks” economy, where conditions are not too hot and not too cold.

Fear of missing out

Of course, corporate and macroeconomic fundamentals are not the only drivers of market movements. There is also the question of stock market sentiment. In Reminiscences of a Stock Operator, the classic market text that relates the investing philosophy of iconic 1920s market speculator Jesse Livermore, the narrator relates how one wise veteran investor, Old Turkey, would ignore the advice of those who said it was time to sell up and take profits. Old Turkey’s reply was always the same: “Well, you know this is a bull market!”

Nothing else mattered – he couldn’t afford to “lose my position” in a bull market.

Such sentiment becomes increasingly common in the latter stages of bull markets, when the fear of missing out overwhelms the usual investor anxieties. The buy-the-dip trade has been a money-winner for years now, but especially so since June 2016’s Brexit vote. Many feared this unexpected upheaval could trigger a global bear market. Instead, it was “shrugged off” within days, as Société Générale analyst and market bear Albert Edwards put it.

Since then, markets have become primed to view all selloffs as automatic buying opportunities. Trump’s election was shrugged off “in a single day”, to quote Edwards again, while other panics were over within hours. In this mood, added Edwards, markets “would shrug off an alien invasion of planet Earth”.

The fear of missing out, coupled with an assumption Trump’s political bluster and sabre-rattling need not be taken too seriously, means markets scarcely dip at all these days.

Thaler and Bloomberg may be scratching their heads, but bulls can point to Merrill Lynch data showing it tends to be more profitable to remain invested in the latter stages of bull markets than to cash in too early. On average, stocks gain 16 per cent in the six months prior to a market peak. In the 12 and 24-month period before peaks, gains average 25 and 58 per cent respectively.

1 Air travel never going ‘back to way it was’
2 Bank of Ireland sees more than 1,400 staff apply for redundancy
3 Should I switch bank now with Ulster Bank at risk of closing?
4 BoI redundancies, ‘tax war’ warning for Ireland, and retailers in rent arrears
5 Coronavirus vaccine: 15 billion doses needed to inoculate the planet
6 South Dublin land at €19m has scope for up to 500 homes
7 Retailers creaking under lockdown rents as industry warns ‘Nama-like’ problem ahead
8 Hostelworld chief financial officer TJ Kelly to step down
9 ‘Tax war’ will hit Ireland if digital tax talks fail, OECD says
10 O’Flynn Group in bid to build 1,137 homes on Dublin’s Naas Road
Real news has value SUBSCRIBE
Save money on international transfers