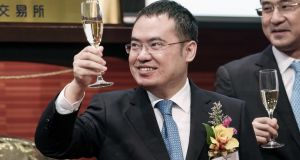 That seems to be the thinking behind the newly-launched FANG+ index futures, a highly leveraged vehicle consisting of 10 technology stocks. The index, which also contains Tesla, Twitter, Nvidia and Chinese giants Alibaba and Baidu, “reads like a who’s-who of speculative 2017 cult stocks”, as Macro Tourist blogger Kevin Muir put it last week.

Now, that tells you nothing about the next three years, but investors invariably get bewitched by red-hot investment themes – just think of the Nifty Fifty in the 1960s, internet stocks in the late 1990s, and the Brics (Brazil, Russia, India and China), which got their own exchange-traded fund near the 2007 market top.

“If you want to do such a crazy thing, it certainly makes it easy to do,” he said last week. “If you like gambling, if you like casinos, these things are really, really, really good.”

Hong Kong investors browse for the next Tencent

The FAANGs may be in demand, but it’s nothing compared to the fevered interest on display for one technology stock in Hong Kong last week.

More than 5 per cent of the city’s population tried to buy shares in online bookstore China Literature when it went public on the Hang Seng index. Demand for the shares was 626 times greater than the shares on offer, tying up roughly one-fifth of cash on circulation in Hong Kong and causing interest rates to spike higher.

Within hours of the opening bell, the share price had more than doubled, making it the most profitable market debut in a decade.

Stocks are currently in vogue – the Hang Seng is up over 30 per cent this year – but the main cause of the excitement lies in the fact China Literature is owned by internet titan Tencent. A relative unknown when it went public in 2004, it’s now one of the most valuable companies in the world, worth some €470 billion after doubling in 2017. China Literature is unlikely to become “the next Tencent”, but try telling that to retail investors with the scent of money in their nostrils.

What goes up won’t be coming down anytime soon

The S&P 500 continues to defy gravity, frustrating traders who mistakenly assume what goes up must come down.

Bespoke Investment Group last week noted the index has been technically overbought – defined as one or more standard deviations above its 50-day average – since early September. Staying overbought for 42 consecutive trading days is extremely rare: the last time it happened was five years ago, and there have been only three such instances since the current bull market began in 2009.

Betting against momentum rarely pays off, with LPL Research data showing above-average returns have typically followed periods where stocks rose eight weeks in a row. Furthermore, we are now in the seasonally strongest period of the year, indicating that cautious types waiting for a decent stock market dip may have to keep waiting.

Would Woodford be right about Brexit? Wouldn’t bet on it

Almost every mainstream economist thinks Brexit will be bad for the UK, but try telling that to Neil Woodford.

Britain’s most high-profile fund manager was nonchalant about the possibility of Brexit prior to last year’s referendum, saying it would be economically neutral. That stance was reiterated last week after Woodford commissioned a follow-up report from Capital Economics. The report said Brexit’s long-term economic impact would be negligible and was described as “very reassuring” by Mitchell Fraser-Jones, Woodford’s head of investment communications.

Really? Capital Economics was founded by Daily Telegraph columnist Roger Bootle, a Brexiteer who has described Brexit as the “great escape”. Needless to say, this is a fringe position: the idea Brexit will be bad for Britain is all-but-unanimous among economists.

Woodford, who has an excellent long-term record, has come under pressure lately, suffering large investor withdrawals after a run of underperformance.

Now, even the best managers periodically underperform, but one understands investors’ concern. Woodford’s contrarian bets have paid off in the past, but the “alarmed consensus”, as Fraser-Jones put it, will likely be right on this occasion.

Donald Trump sometimes forgets the US market is not the only gainer since his election win this time last year. In fact, all but six of 76 countries tracked by Bespoke Investment Group are higher, with Jamaica (72 per cent) and Argentina (63 per cent) leading the way. Among G7 countries, the US ranks fifth, with only Britain and Canada recording smaller gains.