Why is the US stock market so much more expensive than Europe’s?

The US market looks pricey relative to Europe, but it always does. What might cause the valuation gap to narrow? 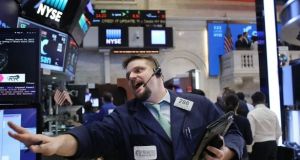 There’s broad agreement that the US market is one of the world’s priciest and that it’s richly valued relative to history. File photograph: Spencer Platt/Getty Images

The case for European stock markets appears to be a simple one. American stocks are much more expensive than European stocks. It generally pays to buy cheaper stocks; ergo, buy Europe. There’s nothing wrong with a simple investment thesis, but is this oft-made argument too simple? Is Europe really that much cheaper than the US? If so, why? Is it cheaper for good reasons? Is it likely Europe will bridge the valuation differential in the coming years, or will the US market retain its valuation premium? Certainly, there’s broad agreement that the US market is one of the world’s priciest and that it’s richly valued relative to history. It’s certainly much pricier than Europe: the average US company is valued at 3.1 times book value, compared to a multiple of 1.9 for Europe (book value refers to the amount a company would be worth if it liquidated its assets and paid back its liabilities).  However, commentators sometimes forget there’s nothing inherently strange about this state of affairs. The US is virtually always more expensive than Europe. Over the last two decades, the US price/book ratio has averaged almost 50 per cent more than Europe’s, according to a recent Deutsche Bank report.

Even at its narrowest point, during the two years prior to the 2008 global financial crisis, the US traded at a 20 per cent premium to Europe. It’s not sufficient, then, for investors to adopt a stance of “Buy Europe, it’s cheaper”. Rather, investors must ask: why does this premium exist? Will it always exist? If so, is the current 70 per cent valuation gap – the highest in 20 years – too large? What, if anything, will cause this gap to narrow? It’s often assumed the valuation gap is driven by the differing sector composition of the two regions. This argument, says Deutsche Bank, states the US is “blessed with an abundance of highly-valued” and super-profitable technology giants like Apple, Google, Facebook, and Amazon, whereas Europe is apparently “weighed down by sclerotic old-economy behemoths”.

However, sector differences don’t actually explain the valuation gap. Strip out financial stocks and the S&P 500 trades on 3.6 times book value, compared to 2.3 for the Euro Stoxx 600. Similarly, the US market still trades on 3.1 times book value even if one strips out the technology and consumer sectors, while European valuations drop by a similar amount if the same sectors are excluded.

The main reason for the valuation gap, says Deutsche, is the fact US companies tend to have superior fundamentals.

Between 1997 and 2005, returns on equity (ROE) in corporate America were two to three percentage points higher than in Europe; as a result, they were rewarded with valuation premiums in the region of 40 to 70 per cent. Around 2005, European companies upped their performance. As returns converged, the valuation gap narrowed significantly; Europe’s price-book ratio rose to 2.5 while America’s remained near 3.

Since 2008, returns on equity have again diverged; the US has sprinted ahead while Europe has lagged. Fatter profit margins in the US have driven this outperformance. Since 2012, net margins for S&P 500 companies have hovered around 10 per cent, while Stoxx 600 companies “have managed barely half that level”. Excluding financial stocks, US net margins have been about 8.5 per cent compared to 5 per cent in Europe.

US margins are “abetted by much greater market concentration”, says Deutsche; declining competition means the four or five largest US companies in a variety of sectors “enjoy market share that European companies can only dream of”.

More flexible labour markets and lighter regulation amplifies the US advantage, the bank adds, as does the fact US companies have been much quicker to take advantage of rock-bottom interest rates, thereby lowering their debt burden. Finally, US companies pay less tax – although US corporation tax appears high, the effective tax rate paid by S&P 500 companies is actually noticeably lower than that paid by Stoxx 600 firms. Profitability aside, Deutsche points to other reasons why investors are usually willing to pay more money to invest in US companies. For one, the dollar’s central role in the global financial system increases demand for dollar assets.

Secondly, institutional investors are attracted by the lower volatility of the US stock market.

Thirdly, there is the question of taxation of investor returns. In Europe, shareholder payouts invariably take the form of dividends, which are taxed at 35–40 per cent. In America, companies are increasingly buying back shares instead of issuing dividends; buybacks increase share prices, resulting in capital gains which are taxed at only 15 or 20 per cent. Consequently, investors get higher post-tax proceeds by investing in a US rather than a European company, even if the two had the same pre-tax payouts.

In other words, the US market has appeared very expensive in recent years, but it has merited its valuation premium relative to Europe. A narrowing of the valuation gap requires either a deterioration in US corporate fundamentals or an improvement in Europe’s.

US profit margins have been at record levels for some time now, and Deutsche cautions a tightening labour market may squeeze margins through higher wages. Meanwhile, European margins could benefit if structural reforms – particularly in France – result in a more flexible labour market.

Still, neither outcome is a given. US companies could raise prices in the event of higher wage costs; competition could force European firms to pass on cost savings by cutting prices.

“On this front, the attitude of policymakers across the Atlantic remains oceans apart”, notes the Deutsche Bank report. As evidenced by recent actions against technology giants like Google, Apple and Amazon, European authorities “are keener on pursuing an anti-trust agenda than their American counterparts”. In any event, Deutsche suggests any changes in corporate fundamentals are likely to unfold slowly. In contrast, the withdrawal of quantitative easing and the possibility of more US rate hikes could cause investors to have second thoughts about the US, resulting in a “sudden realignment”.

US companies, conscious of investors’ thirst for returns in a low-yielding world, have boosted their shareholder payouts (in the form of dividends and buybacks) from 50 to 75 per cent of net income.

In theory, investors should have been “indifferent”, as higher payouts mean less capital being reinvested in the business, thereby slowing future growth. Nevertheless, “rather than question the sustainability of companies paying out three-quarters of their earnings in cash, income-starved investors have rewarded this behaviour by pushing up US share prices”, the report says. If this “fascination” with income-generating stocks declines in the post-QE world, US valuations are likely to contract. This is speculative, of course. Additionally, the aforementioned structural factors make it clear the US valuation premium will not disappear any time soon, so the idea Europe must outperform simply because it is cheaper appears simplistic. Still, the scale of the current premium means the US has no room for error. The ending of QE and America’s “supersized equity valuations” suggest the coming years may finally reward Europe-focused investors.