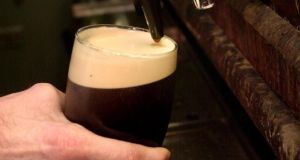 Increasing duty on a pint by 10 cent would collect a further €68 million a year, according to Revenue estimates. Photograph: Dara MacDonaill/The Irish Times

Imposing a flat-rate increase in property tax of €100 on every homeowner in the State would raise a further €180 million a year in the upcoming budget, according to a new report by Revenue.

The report also states that increasing carbon tax by €10 a tonne would bring in additional tax revenue of €216 million a year, while increasing duty on a pint by 10 cent would collect a further €68 million for the exchequer.

These are just some of the revenue-raising measures costed by the Revenue in a report published ahead of Budget 2020 on October 8th.

Given the State’s constrained public finances, with only about €233 million or so available to spend on tax cuts in the budget, Government could look to raise certain taxes in order to bring in more revenue and allow it scope to implement other measures, such as widening the tax bands to keep pace with inflation.

Failure to broaden these bands would see more than 100,000 taxpayers pay more tax come January by virtue of moving into a higher tax band.

Adding 50 cent in excise to a pack of 20 cigarettes would bring in €57 million, while a 50 cent rise on a bottle of wine would raise €30 million.

The Government is expected to raise the current rate of carbon tax from €20 a tonne to €30 a tonne in Budget 2020. Doing so would generate additional revenue of €216 million a year, the Revenue figures show, or €430 million if it was increased to €40 a tonne.

If the Government opts to impose the same rate of excise on diesel that it currently does on petrol, this would bring in €385 million.

A 0.5 per cent increase in the rate applied to commercial property transactions would bring in €47 million, while increasing residential stamp duty to 1.5 per cent, from its current level of 1 per cent, on properties worth less than €1 million, would raise €85 million a year.

These figures mean that unless the Government can come up with new revenue raising measures, its scope for tax cuts on October 8th looks muted.

1 Farmer seeks to challenge €3.6bn Intel plan in High Court
2 Fallon & Byrne founders McHugh and Byrne exit group
3 Cosgrave should give his speech to Web Summit’s partners in Saudi Arabia
4 Council tells Johnny Ronan firm to keep the noise down at D4 Embassy venue
5 Who are Ireland’s 17 billionaires?
6 RTÉ’s multiple lobbying meetings with politicians
7 Paschal Donohoe's biggest regret: 'Not managing the National Children’s Hospital better'
8 Election proposals may make the housing crisis worse
9 European shares up as investors bet on economic uplift in 2020
10 Are there annual limits on inheritances or gifts to a child?
Real news has value SUBSCRIBE
Save money on international transfers