Beyond Meat insiders cash in 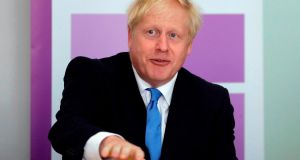 “People who bet against Britain,” Boris Johnson said after becoming prime minister, “will lose their shirts.”

Markets think otherwise, as evidenced by sterling last week plunging to its lowest level against the dollar since January 2017. Stocktake suggested in June that markets might be underestimating the odds of a no-deal Brexit: they are now very much alive to the threat, sterling falling from $1.33 in March to $1.27 in June and to below $1.21 last week.

It seems currency traders are remoaners, doomsters who don’t believe in Britain.

This kind of guff is going down well with Brexiteers for now, but Johnson is playing a dangerous game.

The more he “bangs on about no ifs and buts and heads toward cliff edge, the more likely he will crash the currency”, Financial Times editor Lionel Barber tweeted last week.

Despite sterling’s precipitous decline, the consensus is it will go much lower if the UK does crash out of the EU without a deal, raising the spectre it could breach parity against the euro or even the dollar – “an easily understood and humiliating event” that would badly dent voters’ pride, Bloomberg’s John Authers cautioned last week.

Authers notes that past prime ministers like Harold Wilson, John Major and even Margaret Thatcher have been undone by currency market tribulations; Johnson may yet meet a similar fate.

Beyond Meat insiders cashing in

Beyond Meat, the plant-based meat alternative stock that has skyrocketed since going public in May, is “beyond bubbly”, Stocktake cautioned recently. Company insiders seem to agree; having seen the stock soar from $25 to $240 over the last three months, they’re looking to cash in. Last week, the company announced a secondary offering of shares that would see insiders sell stock at $160 – a significant discount to last week’s peak, but way above the initial public offering (IPO) price.

The secondary offering allows insiders to get around the lock-up period that prevents them from selling stock for six months after the IPO. That would have meant a nervous wait until November, by which time the bubble may have burst.

Unsurprisingly, insiders and institutional shareholders were keen to sell while the going was good. Of course, the poor saps who bought the stock at $240 weren’t happy that insiders were happy to take $160 and run.

Shares tanked following the announcement, prompting anguished wailing on Twitter about how the waiving of lock-up restrictions should be illegal.

However, lock-ups are meant to reassure early investors, the people who took the risk of buying the stock in the IPO – not the speculators who bought high last week, hoping to sell on at a profit to a greater fool. They can hardly say they weren’t warned.

Will August prove a trickier month for stocks?

July’s gains means the S&P 500 has risen in six of the last seven months, but August might be trickier.

So says LPL Research strategist Ryan Detrick, who notes this has been a seasonally weak time for stocks, with the S&P 500 losing an average of 0.78 per cent over the last 10 years – worse than any other month.

Since 1950, only September has been worse for stocks. When August is bad, says Detrick, it is really bad.

In recent decades, markets endured a number of crises during August, ranging from Iraq’s invasion of Kuwait in 1990, the Asian contagion in 1997, the Russian debt crisis in 1998, the US debt crisis in 2011 and the Chinese currency crisis in 2015. Of course, there’s no good reason why things should go pear-shaped in August. Analysing seasonal market patterns is all very well, but the notion August is some kind of unlucky month is astrological fancy.

Still, with stocks up 20 per cent in the first seven months of 2019, Detrick says “we are watchful for any developments that could lead to potential market weakness”.

Driving instructors don’t tell you to avoid trading stocks while driving because, well, it’s not possible right now. That might change, if US brokerage TD Ameritrade has its way.

American drivers lost an average of 97 hours last year due to traffic congestion, the company said, costing them $1,348 per driver.

“For those who follow the financial markets closely,” says Ameritrade, “that loss is compounded by untold missed opportunity.”

Consequently, it is launching voice-activated investing technology allowing drivers to check their portfolio and receive stock quotes in their car.

As Bloomberg’s Matt Levine put it: “You don’t want to crash into a tree and leave your family with nothing because you blew all your savings on frenetic vehicular day-trading.”

1 Irish company paid €1.2m a year by collapsed Blumenthal-linked Australian restaurant
2 Hugo MacNeill steps back from Goldman Sachs role
3 Why bosses should not be afraid of speaking out on Instagram
4 Hammerson appoints lead for move into housing
5 Should AIB compensate me for upsetting letter on arrears?
6 Tax shifts won’t drive multinationals out of Ireland - Moody’s
7 Greencoat Renewables buys Clare wind farm for €35.4m
8 Irish economy to grow by 3.4% this year, predicts EY
9 Facebook founder reiterates need for greater regulation of big tech
10 Chris Johns: The Johnson administration will spend, and needs a quiet Treasury
Real news has value SUBSCRIBE
Save money on international transfers