Stocktake: No end in sight to US-China trade war 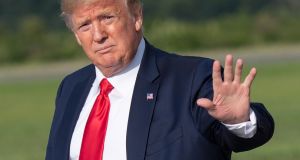 US president Donald Trump may view trade threats as a way of getting the rate cuts he craves, but this would be a pyrrhic victory if China accepts an economic downturn in order to hurt his election prospects. Photograph: Saul Loeb/AFP/Getty Images

Stock markets have been very volatile since the latest escalation in the US-China trade war. Unfortunately for investors, tensions look increasingly likely to persist.

Investors have long assumed Donald Trump would settle the issue prior to his 2020 presidential election campaign. However, a pre-election trade agreement is now unlikely, says Goldman Sachs. That’s echoed by Allianz economist Mohamed El-Erian, one of a growing number of commentators warning China may be tempted to hold tough in the hope economic weakness dents Trump’s re-election prospects.

Trump is playing with fire. His recent announcement of new China tariffs came immediately after Federal Reserve chief Jerome Powell indicated the Fed might have to cut rates to defuse trade-related economic pressures. Trump may view trade threats as a way of getting the rate cuts he craves, but this would be a pyrrhic victory if China accepts an economic downturn in order to hurt his election prospects. Schwab strategist Liz Ann Sonders cites TS Lombard, which compares the US-China trade war to a boxing match; a good boxer can take a hit early on, but the legs begin to wobble by the late rounds. With recession risk rising, it’s “increasingly evident”, says Sonders, that the economy is “beginning to reel from the blows”.

On the lookout for a market bottom

Big declines, big rebounds – already, some hopeful souls are wondering if the bottom is in. Anything’s possible, although technical indicators suggest things may get hairier. Wall Street’s fear index, the Vix, briefly touched 25 last week before quickly falling again; readings of 30-40 are common during market scares, so there’s no sign of a volatility peak. The S&P 500 remains above its 200-day moving average, so it’s clear stocks can go much lower. Similarly, a large number of stocks are trading above their 50-day average; at market bottoms, it’s common for only 10 or 15 per cent of stocks to be in uptrends.

These indicators are worth keeping an eye on. Extremely large one-day drops are also a “historically reliable signal” for investors looking to “jump in at the right time”, says Datatrek Research. How large? The S&P 500 recently endured its biggest one-day sell-off of 2019, falling 3 per cent. Nevertheless, such declines are not uncommon. In contrast, one-day declines of 4 per cent are relatively “unusual”, occurring only 41 times over the last 60 years. They tend to be buying opportunities; one year later, the S&P 500 gained an average of 20 per cent.

“Many investors look for violent one-day declines for attractive buying opportunities, but it takes a truly uncommon event like a down 4 per cent day to best signal an investable bottom”, says Datatrek. A 4 per cent down day represents a “rare but important opportunity, so be on the lookout”.

The amount of government debt trading at negative yields last week exceeded $15 trillion for the first time. That’s a quarter of the global bond market and negative rates may become increasingly normal, bond giant Pimco argued last week, predicting the US may eventually go the same route. A global savings glut driven by demographics and new technologies mean the “natural” rate of interest is being pushed “lower and lower”, says Pimco.

Maybe, although it’s hard to get one’s head around the fact so many investors are now paying governments to take their money. You can pay about half a percentage point in negative rates to fund the German government via 10-year bunds, Ritholtz Wealth Management chief executive Josh Brown tweeted last week, or you can pay the same amount to hold an exchange-traded fund (ETF) that allows you own the German stock market, which trades at a reasonable book value and offers a 2.7 per cent dividend yield. “Ten-year holding period?” Brown asks. “Which would you choose?”

Market falls are unpleasant, but normal

The recent market turbulence has been unpleasant, but it’s not as scary as some headlines might suggest. Yes, the Dow Jones Industrial Average experienced its sixth-largest points drop in history; however, in percentage terms, it was only the 435th-largest drop, notes LPL Research strategist Ryan Detrick.

Stocks fell 3 per cent that day, making it the worst day of 2019, but Detrick notes the average worst day of the year sees a market decline of more than 4 per cent. 2019 has just seen its second pullback of at least 5 per cent, but the average year in recent decades has seen over three separate 5 per cent pullbacks. Since 1990, the S&P 500 has declined an average of 14 per cent from peak to trough; even in positive years like 2019, it has dropped an average of 11 per cent.

The good news for investors is that recent market action is entirely normal. The negative flip-side for those of a nervy disposition, however, is that Detrick’s data suggests further volatility should be expected.