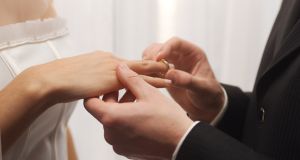 Looking to save hundreds of thousands in tax over your lifetime?

Well, if you live in the UK and you cohabit with your partner, but don’t want to get married, you’ll soon be able to, thanks to the imminent passing into law of the Civil Partnerships, Marriages and Deaths Bill.

If you live here in Ireland however, your only option to save on those tax bills is marriage.

The new UK bill follows a supreme court ruling from June last year that found restricting civil partnerships to same-sex couples was in breach of human rights, and is set to have a profound impact on those couples who, for whatever reasons, don’t want to get married but do want to enjoy the benefits the union bestows financially and legally.

The UK is not the only country to go down this route, of offering a legal alternative to marriage. France for example, has its PACS regime, or Pacte Civil de Solidarité, which it introduced back in 1999, ostensibly for same-sex couples.

Since then however, the regime has been largely co-opted by straight couples – and those who aren’t even in a romantic relationship – looking for a half-way house between cohabitation and marriage.

The majority of those getting PACS are now opposite-sex couples, looking for stronger rights.

For some, marriage is the gold standard and shouldn’t be undermined by introducing a similar regime for civil partnerships

While the regime means that you don’t have the same inheritance rights as married couples, and it’s much easier to dissolve than a marriage, what you do get however, is the benefit of paying your taxes in a similar fashion to a married couple.

Here in Ireland however, no such regime exists for cohabiting couples who are either not ready for, or don’t believe in, marriage.

While civil partnership was introduced back in 2011, it only applied to same-sex couples. It was later rescinded following the Marriage Equality Act of 2015, and this means that marriage is now the only game in town.

Not only that, but as we now have no civil partnership regime, it means that such partnerships entered into in other jurisdictions such as France – and now the UK including Northern Ireland – won’t be recognised under Irish law, according to Muriel Walls, a partner in family law with Walls & Twomey.

For some, marriage is the gold standard and shouldn’t be undermined by introducing a similar regime for civil partnerships.

But is this to ignore the very obvious trend in the fact that the number of families opting to cohabit, rather than marry, continues to soar?

Back in 1996 for example, there were just 31,298 cohabiting families with, or without, children in Ireland according to figures from the Central Statistics Office. By 2016 however, this had rocketed fivefold to 152,302.

At the same time, the number of couples with children opting to get married increased by just 15.6 per cent.

And there is no doubt that these 152,000 couples – some of whom will go on to marry – may be putting their financial security at risk by opting not to marry.

Thanks to the “fiscal preference” that still exists for married couples, opting not to marry can be expensive.

As The Irish Times showed last year, a cohabiting couple on a single income of €100,000 will end up paying about €408,400 more in tax over 40 years than a dual earning married couple.

And cohabiting couples in Ireland also lose out in other ways.

They don’t, for example, get to benefit from other State perks such as the home carer’s credit, which increased to €1,500 as of this January, while they can’t transfer assets, such as a pension, between them tax-free.

They may also not have automatic rights to each other’s assets, while they may face a huge cost in terms of inheritance tax – including on life insurance pay-outs – should one of them die.

A couple who never married for example, will be deemed to be “strangers” under tax law, which means that they will have a tax-free threshold of just €16,250; if they were married, all their assets can be transferred tax free.

But this is not to suggest that cohabiting couples have no rights in Ireland at all. The full name of the legislation which provided for the aforementioned introduction of same sex civil partnerships back in 2011 is in fact the Civil Partnership and Certain Rights and Obligations of Cohabitants Act 2010.

According to Walls, the Act introduced a redress scheme for cohabiting couples, granting such couples some similar rights as those enjoyed by married couples.

As she stresses however, “it’s not the same as marriage”, and it’s really about making sure that a less well off member of a couple doesn’t find themselves in tough circumstances when a relationship ends.

Whichever way you look at it, there is still a huge gap between those cohabiting and those who are married

Crucially, to benefit from a financial pay-out in the event of the breakdown of the relationship, such as a property or pension adjustment order, the member of the couple seeking this has to be financially dependent on the other.

This requirement does not apply when it comes to an inheritance tax claim.

And there are other restrictions; the couple must have been living together for at least five years if they’ve no children, or two years if they have.

While the aforementioned Act allows one member of a cohabiting couple to inherit a property free of capital gains tax when they haven’t been provided for in a will, if their partner does make provision for them in a will, then they stand to face a hefty tax bill.

Whichever way you look at it, there is still a huge gap between those cohabiting and those who are married.

While some may argue that this as it should be, others might wonder why, if we set the pace when we became the first country to legalise gay marriage by popular vote, have we left behind an even larger cohort who don’t want marriage but do want legal protection?

1 ‘Saudi Arabia is where the opportunities will happen in future’
2 Data centres will force State to choose between climate and investment
3 MSD buys Takeda biologics plant in Dunboyne
4 State’s biggest landlord records 30% rise in rental income
5 Scars from the crash give Irish banks 2.6 billion reasons for Covid caution
6 Project to identify spare intensive care beds accelerated by pandemic
7 Elderly parents living in property you own will save you on capital gains tax
8 Identigen founders make €12m each from sale of company
9 What will the office market look like after the great remote working experiment?
10 Blackrock Clinic and Hermitage deals approved by regulator
Real news has value SUBSCRIBE
Save money on international transfers