Short bets against sterling now at highest level since December 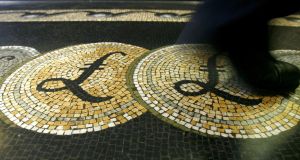 A mosaic of pound sterling symbols set into the floor of the front hall of the Bank of England in London. Photograph: Luke MacGregor/Reuters

Sterling enjoyed its biggest one-day bounce in almost two years last week after Westminster voted to reject the prospect of a no-deal Brexit, driving it to nine-month highs and making it the world’s best-performing major currency in 2019. Markets have become increasingly optimistic regarding prospects for a soft Brexit or even a second referendum but not everyone is convinced, with Citigroup data showing short bets against sterling are now at their highest level since December.

Certainly, it bears repeating that risks remain. MPs have kicked the can down the road and little progress has been made towards signing a Brexit deal. A second referendum would be a poisonous affair and opinion polls indicate there’s no guarantee that Britain would change its mind.

A UK election, too, brings obvious risks. Investors aren’t keen on Jeremy Corbyn – Steve Eisman, the hedge fund manager who was dramatised in The Big Short movie and who is short British banks, has warned: “You don’t want to be invested in the UK if a Trotskyite is prime minister.” Nor are they keen on that most irresponsible of Brexiteers, Boris Johnson, who may yet lead the Conservatives into the next election. Sterling volatility has been much greater than that seen in other major and emerging market currencies. The murky outlook suggests that’s unlikely to change any time soon.

The recent market pullback was a short-lived affair, with the S&P 500 last week hitting new highs for 2019. Are all-time highs in the offing? Despite soaring 20 per cent since Christmas Eve, stocks have a bit to go yet, sitting 5 per cent below last October’s peak. Previous bounces in November and December petered out at the current juncture, although stocks look like they’re ready to go further this time.

In an unhealthy market, rallies tend to be narrow, with indices overly dependent on a minority of stocks, but the current rally continues to be broad-based – roughly 85 per cent of stocks are trading above their 50-day moving average.

Excessively bullish sentiment can be a red flag, but there’s little sign of that. LPL Research notes investor fund flows have actually been negative in 2019, while sentiment among retail investors actually fell last week, with the latest American Association of Individual Investors poll showing almost as many bears as bulls. The extent of the gains over the last three months suggests stocks may need to consolidate for a while yet, but bulls are surely now eyeing October’s peak.

There’s another reason why this market advance looks healthy – declining correlations. Early in the current bull market, between 2009 and 2011, correlations between different sectors were incredibly high – that is, all sectors tended to rise or fall in unison. There was, Datatrek Research noted last week, a “herd mentality”, with investors responding to global central banking policy rather than to specific industry fundamentals.

Correlations remained high but gradually eased over the following years, finally retreating to historically normal levels in 2017. Sector correlations tend to spike during sell-offs as investors run for the hills, but that didn’t happen during the recent pullback. In fact, the correlation between sectors is now lower than it was in January and February, according to Datatrek.

That shows this “hasn’t just been a mindless snap-back rally” from the December lows. Rather, investors are “differentiating between sectors more than earlier this year”. For all the recent worries about the US-China trade war and slowing global growth, that’s indicative of a calm, healthy market.

Boeing’s troubles drag down the Dow

In contrast to the S&P 500, the Dow Jones Industrial Average remains well off February’s highs, all because of one stock – Boeing. Shares in the troubled airliner have endured a torrid time since the Ethiopian Airlines crash involving Boeing’s 737 Max 8 aircraft, dragging the Dow down with it. The S&P 500 was relatively unaffected because it is, like most broad indices, weighted by market capitalisation, with the most valuable companies having the greatest impact on its movements.

In contrast, the 30-strong Dow index is price-weighted; the higher a company’s share price, the more it impacts the Dow.

That means Boeing, with a share price of $375, has easily the most influence on the index’s movements. It has more than three times as much influence as the world’s most valuable company, Microsoft, despite the tech giant being more than four times as valuable.

In fact, Boeing’s high share price means it has more influence than Microsoft, Apple, Cisco and Intel combined, even though the tech behemoths have a combined market capitalisation of more than $2 trillion – roughly 10 times that of Boeing.

Daft? Quaint? Just a bit. The odd thing is, data shows the Dow and the S&P 500 are almost perfectly correlated over the last 50 years, with the two indices largely moving in tandem. Somehow, this outdated index still works.