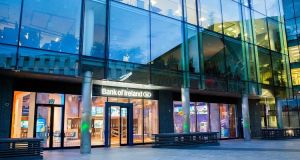 Bank of Ireland wants its customers to get a better grip on their finances.

Bank of Ireland said on Monday that it is still accepting applications from putative home buyers looking to avail of an exemption under the Central Bank’s mortgage rules.

There had been some reports that the flow of exemptions, which allow borrowers to borrow more, that banks have to manage in order to meet restrictions imposed by the regulator, are set to expire soon, but Gavin Kelly, chief executive, retail Ireland, at Bank of Ireland, said that it is still “very, very early” in the year, and that the bank is still inviting people to come in and apply for a mortgage, even if they’re looking for an exemption. The rules means that banks are allowed lend more than 3.5 times income to 20 per cent of first-time buyers and 10 per cent to second and subsequent buyers, as well as a fixed proportion of exemptions on the loan to value side. Last year the amount of exemptions banks could offer ran out as early as April.

The comment comes as the bank launched a new wellbeing programme, looking to encourage some 200,000 of its customers to get better at managing their money this year, as new research shows that the majority of people in Ireland are not in as much control of their finances as they want to be.

The Bank of Ireland Financial Wellbeing Programme, which will run to 2023, marks a €5 million investment from the bank, with the aim of helping over 200,000 of the bank’s customers get a better grip on their money.

Research conducted by the bank found that one third (34%) of people in Ireland are very worried about personal finances, more than half (55%) have no pension, and one in four would last less than a month without having to borrow if they lost their main source of income. About a quarter of those classed as financially struggling are middle class households, with almost one in five (18%) of Irish households at the higher end of the income spectrum struggling or stretched with their finances.

Gavin Kelly, chief executive, retail Ireland, at Bank of Ireland, said the new programme is about helping its customers “to thrive”.

“Through our programme, we want to help consumers build a better relationship with money, empower them to take control of their daily finances and ultimately support better financial decision making for themselves, their families, and their businesses. Consumers and businesses can improve their financial wellbeing in the same way as they improve their physical health or fitness - through awareness, setting goals, and support,” he said.

Key elements of the programme include health checks, which will enable consumers and businesses alike to check their own wellbeing score via an online questionnaire. If you check your score, by answering questions such as how manageable your debt is, and how much you spend compared to your income, you will then be able to arrange a meeting with an advisor. Of course boosting the number of customers who avail of a trip to a financial advisor might also boost the bank’s bottom line, by increasing sales of pensions and life assurance products. The bank is a tied agent of New Ireland, its wholly owned subsidiary, for life and pensions business, which means that it can only distribute New Ireland’s products.

Customers will also be given the option of signing up for a seminar on financial literacy. The free talks will be held in places like Dublin, Limerick and Galway over the coming months, and will be delivered by Frank Conway, financial literacy expert.

The bank will also undertake a significant expansion of its Youth Financial Literacy Programme by offering the programme to every primary and secondary school student in Ireland.