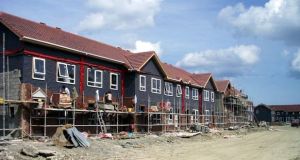 There might be fewer than 6,000 homes available to those using the help-to-buy scheme this year

An expanded help-to-buy scheme was a surprise element of the €7 billion stimulus plan unveiled on Thursday by the Government, and with good reason.

The plan allows first-time buyers purchasing a newly-built home – or building one themselves – to claim back up to €30,000 in income tax paid and DIRT on bank deposit interest over the last four years. As before, you cannot claim back either universal social charge or PRSI paid over that period.

That is a substantial increase on the current rules that allow home purchasers to claim back a maximum of €20,000.

Good news for hard-pressed homebuyers then?

First, Covid-19 has severely stunted the construction sector in general, including housebuilding. Latest projections for the industry is that only 14,000 homes will be built this year. That’s just two-thirds of the 21,000 built last year which was still way short of what was needed to address the crisis in housing supply.

And, as the Construction Industry Federation said last February, just 8,000 of those 21,000 new homes actually went on sale on the open market: the rest were either bought for social housing, built for rental by institutions or one-off properties built to order for owners, many of whom would be trading up.

The same issues mean there might be fewer than 6,000 homes available to those using the help-to-buy scheme this year.

Secondly, the expanded scheme will only apply to December, which is a very short window. There is talk the Government might extend the scheme further in the October budget but we will have to wait and see if that happens and what any extended scheme might look like.

Third, there is no guarantee that the extra €10,000 will make home more affordable. When help-to-buy first came in, one of the most frequent criticisms was that it merely fuels demand rather than increasing supply.

For the short-term, it might make totting the sums easier for first-time homebuyers this year but only if developers don’t increase prices on new homes schemes to match. And the suspicion since since help-to-buy was first introduce din 2014 if that builders do just that.

When the hospitality sector was looking for a dramatic VAT cut in the stimulus plan, they were quite transparent that it was not to pass on to customers but to allow them to recover margin. With current supply constraints, the beefed up help-to-buy scheme looks like delivering precisely that for builders – at a projected cost of €18 million to the State.

As John FitzGerald argues in The Irish Times on Friday, Covid has led to a significant increase in household savings anyway. As people recover some confidence next year and thereafter, some of these savings will likely find their way into the housing market – further fuelling house price inflation.

Finally, first-time buyers will still have to secure a mortgage. The rules limiting that to 3.5 times earnings are still in place as is the 90 per cent upper limit on the mortgage loan to the value of the property.

But the borrowing environment is more difficult. Banks are much more reluctant to consider the limited number of exceptions the regulator permits them to those rules.

First-time applicants, who are generally less established in their employment, could find themselves affected by workplace cutbacks – depending on State support either through the temporary Covid wage subsidy scheme or the pandemic unemployment payment. And, as we know from the banks, anyone in such a position is unlikely to be able to draw down a mortgage even if previously approved.

With all the competing calls for stimulus cash ahead of the plan being announced, it is telling that this was an area noticeable by its absence. What housing needs is more supply, especially of affordable homes, not further tinkering to sustain prices that are already beyond the reach of so many aspiring homeowners.