Why the Covid-19 crisis may push up house prices 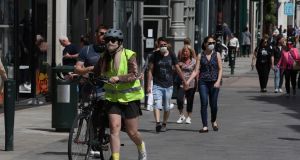 Grafton Street: If an effective vaccine is developed over the coming 18 months and the economy can be taken out of cold storage, some lost ground of 2020 may be made up. Photograph: Stephen Collins/Collins

The publication of the Central Statistics Office’s estimates of last year’s economic growth is normally newsworthy. But when figures appeared indicating that our gross domestic product had grown by about a quarter in 2015, it generated huge headlines, not just in Ireland but across the world.

Of course, while the Irish economy performed well in 2015, it didn’t grow by anything like that scale – rather these data showed how the standard international approach to measuring output just doesn’t work for an economy as internationalised as Ireland’s. It is not easy to discern the true picture from the data.

The CSO now provides an increasing breadth of relevant statistical information which enables more precise estimation of true growth in our economy. However, some of this data is only available in late autumn, so that a complete understanding of Ireland’s economic progress in 2019 must wait until then.

The publication earlier this week of CSO’s national accounts for 2019 portrays an economy that was continuing to grow vigorously, though possibly somewhat slower than in previous years. The growth was broadly based, with all major sectors showing progress.

A rather striking growth in agricultural output of 28 per cent in 2019 partly reflects a very bad year in 2017. Less surprising, the IT and construction sectors also grew very rapidly. The data suggests that, as in previous years, the share of the growth coming from foreign multinationals was probably about 20 per cent, with most of the increase in value-added coming from Irish-owned business.

When the data arrives, 2020 is likely to prove very different from last year. The first quarter’s economic figures, with two months of normal activity and March affected by lockdown, suggest that multinationals will account for a greater share of output in 2020.

So far, the data suggests the IT and foreign-owned manufacturing sectors seem to have been little affected by the crisis, continuing to export, so that their contribution to real growth, emanating from their large wage bill and corporation tax payments, will provide some offset to the dramatic fall in output in the sectors dominated by Irish-owned firms. The more-favourable-than-expected tax figures for the first half of the year reflect this.

The relatively robust performance of some key sectors suggests that, if an effective vaccine is developed over the coming 18 months and the economy can be taken out of cold storage, some of the lost ground of 2020 may be made up. If no suitable vaccine is found, the Irish economy, along with other developed economies, will continue to be hobbled into the future.

Another key set of data published by the CSO this week covered Ireland’s trade and payments with the rest of the world. In the past, large deficits in our balance of payments provoked periodic economic crises – for example in the mid-1950s and in the 1980s.

The large deficit that emerged in the 2005-2007 period should have warned of the impending crash.

When account is taken of the complex transactions of multinationals, the data for 2019 shows an Irish surplus of truly German proportions: last year Ireland was reducing its net foreign indebtedness very rapidly, leaving the country in a very strong position to borrow to fund the current crisis.

With fewer than expected homes, and more money to chase them, there could be further house price inflation

The lockdown and the measures the Government has taken to insulate households have resulted in a sudden jump in household savings. While the last six weeks have seen a return to consumption in some sectors, savings will continue to mount over the rest of the year.

However, with capital as well as current spending held back by the Covid-19 crisis, we will see a significant shortfall in investment. Instead of the planned increase in new homes in 2020, we will build much less than last year.

With the serious reduction in investment, especially in construction, Ireland will continue to rapidly repay its foreign debts in 2020, despite huge government borrowing.

Some of the increased household savings are likely to find their way into the housing market in 2021 and 2022. With fewer than expected homes, and more money to chase them, this could well fuel further house price inflation.

The efforts of the new government to raise housing supply will have to contend not only with already chronic undersupply, but also with the blow to building activity due to Covid. With this extra mountain to climb, it will be the middle of the decade before we can hope to balance housing demand with supply.