Stocktake: Corporate insiders are cashing in 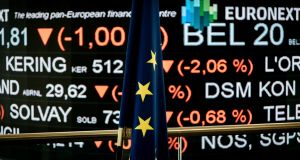 Corporate insiders stocked up on shares as equities plunged in March but the mood has turned cautious. Bloomberg last week noted data from Washington Services showing executives are selling five times as much stock as they are buying, a ratio only seen twice in the last three decades.

Similar data is reported by InsiderInsights.com, which says it is near levels often seen near short-term tops. Insider selling is a fallible indicator, as executives may sell stock for any number of innocuous reasons. Still, following a near 50 per cent rally in the face of continued economic uncertainty, executives could be forgiven for thinking now is as good a time as any to take some chips off the table.

1 MSD buys Takeda biologics plant in Dunboyne
2 ‘Saudi Arabia is where the opportunities will happen in future’
3 State’s biggest landlord records 30% rise in rental income
4 Irish tourism must also help itself to survive the pandemic
5 Refurbished Cafe en Seine doubled sales to €9.5m before pandemic
6 Facebook agrees Irish wind-farm deal with Brookfield in Tipperary
7 What will the office market look like after the great remote working experiment?
8 Scars from the crash give Irish banks 2.6 billion reasons for Covid caution
9 Wirecard was looted before collapse, German prosecutors suspect
10 Identigen founders make €12m each from sale of company
Real news has value SUBSCRIBE
Save money on international transfers