‘If you claim the rise, you own the fall’ 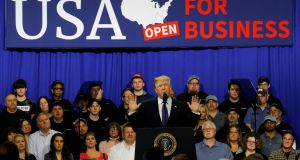 Donald Trump: no other US president has allied himself so closely to the stock market. Photograph: Jonathan Ernst/Reuters

Until recently, it was hard to stop Donald Trump boasting about soaring stock prices. “We’re setting a record literally all the time,” he said last month, “and I’m telling you, we have a long way to go.”

Prior to the recent market walloping, Trump had been the cheerleader-in-chief for the bull market, seeing it as an ongoing vote of confidence in his administration’s handling of the economy. Will Trump’s market-friendly stance help stocks overcome the recent correction? Or is he grossly exaggerating his importance to stock markets?

Only the most ardent of Trump supporters would deny the president tends to over-egg things.

“The reason our stock market is so successful is because of me,” he said last November, a theme he returned to at the World Economic Forum in Davos last month. The stock market “is up since my election almost 50 per cent”, but it “would have been down close to 50 per cent” if Hillary Clinton had won the presidential election 14 months ago. “That’s where we were heading. I really believe that.”

Such claims are patently ridiculous, for a number of reasons. Firstly, it defies probability to say a Clinton administration would have catalysed a massive market crash, given the Dow Jones Industrial Average – Trump’s preferred stock market gauge – has only once suffered a market drop of that magnitude since the 1930s (during the global financial crisis in 2007-09).

Secondly, the bull market did not begin with Trump’s election victory in November 2016; it began almost eight years earlier, in March 2009, with stocks more than tripling in value during Barack Obama’s reign. Trump appears to have forgotten this inconvenient fact, claiming last month that the “fake news media barely mentions” new highs in the stock market, adding: “Can you imagine if ‘O’ was president and had these numbers. [It] would be biggest story on earth.”

The main drivers of that growth were a significant expansion in US corporate profits following the ending of the so-called earnings recession and a synchronised global economic expansion that gathered pace in 2017, with all 45 economies tracked by the Organisation for Economic Co-operation and Development (OECD) growing for the first time in a decade.

Stock markets around the world partied last year, with much of the developed world enjoying bigger gains than those seen in the US. As economist Paul Krugman put it last October, if there is a “Trump bump”, then there is also a “Merkel bump, a Macron bump, a May bump, an Abe bump”.

Finally, Trump’s boasts about “virtually unprecedented” market gains, a “stock market like just about they’ve never had before”, do not hold up to scrutiny. The S&P 500 rose 24 per cent during Trump’s first year in office – a very fine first-year return but one surpassed by many other presidents (the S&P 500, for instance, gained 41 per cent during Obama’s first year in office). It is politically convenient for Trump to focus on the much narrower 30-stock Dow Jones index, which has enjoyed much bigger gains than the more representative S&P 500.

Still, the 2017 rally was notable in many respects. The stock market, Trump noted recently, enjoyed more new highs in 2017 than in any other year. Volatility, as measured by the Vix index, was never so low for so long. Prior to February’s sudden market falls, stocks had not experienced a 5 per cent reversal for over 19 months while the last 3 per cent reversal was 14 months ago – both records. Clearly, the consensus expectation that a Trump presidency would usher in market volatility was very wide of the mark.

Markets learned to ignore the endless political controversies and the provocative tweets, taking the view Trump’s bark is worse than his bite. In the early days of his administration, individual stocks like Boeing and Lockheed Martin suffered short-lived stumbles after being criticised by Trump on Twitter, but that effect has since faded

Markets learned to ignore the endless political controversies and the provocative tweets, taking the view Trump’s bark is worse than his bite. In the early days of his administration, individual stocks like Boeing and Lockheed Martin suffered short-lived stumbles after being criticised by Trump on Twitter, but that effect has since faded.

In fact, companies targeted by Trump have outperformed firms favoured by the US president, according to money manager and Bloomberg columnist Barry Ritholtz. He constructed an “Oligarch index” of Trump-friendly companies such as Exxon Mobil and Goldman Sachs as well as a “Drain the Swamp” index consisting of companies like the New York Times and Amazon. The Trump-friendly stocks advanced 19.5 per cent over the last year, compared to a 42.5 per cent advance for the latter index. Investors, concludes Ritholtz, “eventually realised that, when Trump attacked companies, it was empty sabre-rattling, safely ignored”.

In contrast, Trump has tended to deliver on the promises that excited investors, namely corporate tax cuts and deregulation. Sceptics charge the tax cuts are a one-off effect that will wear out over time, as companies gradually repatriate accumulated profits from countries such as Ireland to the US. And economists are largely sceptical as to whether they will generate the long-term growth imagined by the Trump administration.

Still, there’s little doubt the prospect of free money excited investors, even if some now worry Trump’s deficit-expanding policies will overheat the US economy, prompting inflation and an acceleration in rate-hiking plans.

Though no fan of Trump, Ritholtz Wealth Management chief executive and Reformed Broker blogger Josh Brown has argued that the president ignited “animal spirits” in the stock market and the real economy. Small business confidence measures “shot up” immediately following Trump’s inauguration and have “remained elevated” since then, says Brown, while valuation multiples have continued to expand.

Gallup polling appears to partly confirm Brown’s thesis, with Americans’ economic confidence soaring higher in 2017. Interestingly, US economic growth has only enjoyed a modest increase, growing by 2.5 per cent over the last year compared to annualised growth of 2.2 per cent between 2009 and 2016, while the modest reduction in unemployment (from 4.7 to 4.1 per cent) is a simple continuation of a downward trend that began in 2010.

However, Americans’ perceptions of the economy have changed. Gallup’s polls show economic perceptions among Republican-supporting voters spiked higher even before Trump took office. Enthusiasm has been much less pronounced among Democrat supporters, but it has remained stable, the net effect being a sharp increase in confidence among the general populace.

The problem with animal spirits, however, is they can “give way to primal fear”, as economist Nouriel Roubini warned last week following the heavy market falls. Past presidents, conscious of their inability to dictate financial market movements, deliberately refrained from commenting on stock prices but Trump has been unable to show the same restraint in a rising market.

The problem is that “if you claim the rise, you own the fall,” as Jay Carney, a former White House press secretary for Barack Obama, put it last week.

The sell-off, though frighteningly rapid, may yet prove a short-lived affair, with many strategists suggesting January’s stock market melt-up may resume once the current scare is processed. No doubt, Trump would be delighted if this proves to be the case.

Still, no other US president has allied himself so closely to the stock market, and with good reason. Of the 14 US presidents since 1929, all but three have experienced bear markets. Trump should be careful what he wishes for: the recent market falls are a reminder that the problem with melt-ups is they tend to be followed eventually by meltdowns.

1 Passengers face queuing in car parks at Dublin Airport
2 Major credit union plans to limit savings accounts to €40,000
3 Ikea among major retailers to reopen next week
4 Woodchester founder Craig McKinney dies
5 Brother is dragging his heels as executor of uncle’s will - is there anything I can do?
6 Angela Merkel sweeps in to save the euro zone
7 Revenue tells court it was entitled to raise €1.64bn tax assessment against Perrigo
8 Student accommodation sector set for harsh Covid-19 lesson
9 Cycling made easier with an Irish-made electric bike
10 Avoca wins battle with Monkstown locals over cafe operation
Real news has value SUBSCRIBE
Save money on international transfers