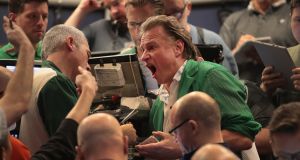 Pension savers more than 10 years to retirement, and even those closer to that date, should not panic on the back of recent market volatility, even if their pensions will have fallen by about 2-3 per cent due to the recent sell-off. However, pension advisers suggest that the fear could be used as a warning bell for pension savers to make sure they are invested appropriately.

For John Tuohy, chief executive of Acuvest, the latest volatility is not a huge concern.

“The headlines are disproportionate to the moves,” he says, while Mairead O’Mahony, Mercer’s DC and financial wellness leader, agrees, although is a little more bearish.

“We’re not panicked by it, although it was a significant enough fall and the volatility of stock markets has more than doubled over the last week which is an indicator of the panic and fear in the market,” she says.

With global markets down by about 4 per cent over the last two days, O’Mahony says Irish pension funds will likely be down about 2-3 per cent.

However, it’s not a reason for pension savers to make any sudden moves.

If you’re in an occupational defined benefit scheme, either currently working or retired, “there’s no decision to be made, you’ve nothing to worry about” Tuohy says.

And if you’re one of the eight in ten pension savers who opt for a default fund in their defined contribution schemes, and are approaching retirement, you’ll likely be protected by “lifestyling”, which sees fund managers sell you out of risky assets and into safer ones like bonds.

“The theory behind that is to protect you,” says Tuohy, adding that these people don’t need to act either.

If you’re already retired and are invested in an approved retirement fund (ARF), your fund should also be de-risking.

“If you’re on this de-risking path and everything is proceeding as it should, don’t panic and don’t take unnecessary action, you’re on the right path ,” says O’Mahony.

For people who manage their own pension funds however, they face the risk of “doing exactly what they shouldn’t be do” and have a knee jerk reaction to the latest volatility and selling at a low price.

“If someone has a concern, they should get advice before they start trading; one thing that definitely destroys value in pensions over time is trading in and out ,” advises Tuohy.

“At times like this it’s no harm to check that your default arrangement is in place and de risking is due to kick in when it should,” says O’Mahony, adding that people invested in ARFs should also be reviewing their investments on an annual basis.