Stocktake: Investors are still jumping in as FOMO trumps worry of losing money 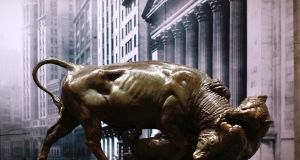 Animal spirits appear to be stirring in financial markets, with the S&P 500 enjoying its best start to a year since 1999. For many investors, the fear of missing out is trumping the fear of losing money. Is the ongoing US bull market, now almost nine years old, about to enjoy a classic late-cycle melt-up?

A growing number of influential investors think it’s an increasingly likely prospect. Money manager Bill Miller, who famously beat the S&P 500 15 years in succession between 1991 and 2005, reckons stocks have the potential to run up another 30 per cent or so in 2018.

Jeremy Grantham, co-founder of GMO the Boston based asset management firm, who is famously bearish in his long-term outlook, said last month that “as a historian of the great equity bubbles” he believed stocks could rise more than 50 per cent over the next six to 24 months as they are “currently showing signs of entering the blow-off or melt-up phase of this very long bull market”.

The word “melt-up” is also used by Wall Street strategist Ed Yardeni, who envisages strong gains in 2018, whilst strategists at Morgan Stanley and Goldman Sachs use related terms like “euphoria” and “rational exuberance” to describe the outbreak of bullishness in equity markets.

Stocks are certainly flying high, fuelled by excitement surrounding an increasingly strong global economy, rapidly rising earnings expectations and a sizeable cut in US corporate taxes from 35 to 21 per cent. The first week of 2018 was the best in more than a year for the tech-heavy Nasdaq and the S&P 500. The two indices hit record highs in each of the first six trading sessions of 2018, as did the blue-chip Dow Jones Industrial average.

By the middle of January, the S&P 500 was within touching distance of the consensus Wall Street year-end target. Technical traders were noting the S&P 500’s 14-day relative strength index (RSI) indicated stocks were more overbought than at any stage over the last 20 years.

More than 70 per cent of stocks were recently trading over one standard deviation above their 50-day moving average, the highest number in almost two years. Momentum stocks are enjoying the biggest gains – in the US, the MSCI’s momentum index has risen 44 per cent over the last year, roughly twice the S&P 500’s gain. Monthly inflows into US equity funds have just hit record levels – inspired, as Merrill Lynch’s Michael Hartnett put it, by the “fear of missing out”.

Stocks have been rising for years now. Including dividends, the S&P 500 has more than quadrupled since March 2009, but the current mood appears different. Sentiment has been relatively muted for most of this bull market. Fund managers have been cautious, holding above-average levels of cash. Ordinary investors have been apathetic, judging by retail sentiment surveys.

That caution is now being abandoned. Equity allocations among ordinary investors hit 17-year highs in December, according to American Association of Individual Investors (AAII) data. Bullish sentiment, which has been well below historic norms in recent years, has exploded higher. A recent AAII survey showed there were four times as many bulls as bears, a differential that is greater than 96 per cent of readings seen over the past 30 years.

Other barometers of retail sentiment confirm this picture. E-Trade’s quarterly Streetwise survey showed client bullishness was at four-year highs, while equity exposure among TDAmeritrade customers is at record highs.

Professional investors, too, are beginning to throw caution to the wind. Merrill Lynch’s January fund manager survey shows cash levels have fallen to five-year lows; equity allocations are at two-year highs; the ratio of stocks to bonds is at its highest level since August 2014. Fewer investors are taking out protection against a market correction than at any time since 2013. Among hedge funds, equity exposure has hit levels unseen since 2006.

Investment newsletter writers, meanwhile, are euphoric. The percentage of bullish advisers recently hit 67 per cent, according to Investors’ Intelligence polling – the highest level in 31 years. The equivalent figure for bearishness, at just 13 per cent, is also at 31-year lows. Previously cautious advisers, notes Investors’ Intelligence editor John Gray, “appear to be chasing a rallying market, adding fuel to the fire”.

Analysts, too, envisage good times ahead. Enthused by the prospect of corporate tax cuts, analysts have recently raised earnings estimates for 757 companies, or 31 per cent of the S&P 1500 Composite Index – the highest number in more than a decade, according to Bespoke Investment Group.

The optimism is “really overwhelming”, says Leuthold Group chief investment officer Jim Paulsen, and is all the more “striking [because] we haven’t had it in the entire recovery”.

It’s often said that bull markets climb a wall of worry so Paulsen is concerned that this wall of worry – “the cornerstone of this bull market” – is “gone”, the point being that potentially excessive expectations “opens you up to the bear’s bite”.

He notes that this was the case in 1986, the only occasion where the Investors’ Intelligence bull-bear ratio topped today’s extremes; stocks went on to melt-up that year and for most of 1987 before the market crashed on Black Monday in October. Nautilus Capital data shows that in all other instances where adviser bullishness hit extreme levels, stocks were higher three months later every single time.

Similarly, the fact that sentiment is finally getting frothy among ordinary investors indicates a near-term melt-up is more likely than a meltdown. Nautilus found 12 previous instances where bullishness hit high levels for the first time in at least six months. Stocks were higher six months later in all 12 instances, enjoying above-average returns in the process.

In other words, markets tend not to peak as soon as bullishness hits apparently extreme levels; rather, sentiment keeps getting frothier as prices continue to accelerate higher. Sentiment is very bullish at the moment but bulls contend this bullishness is supported by improving fundamentals.

“The melt-up in stock prices in recent weeks has been driven to a large extent by a melt-up in analysts’ consensus expectations for earnings,” says Yardeni. S&P 500 companies are forecast to increase earnings by almost 15 per cent this year. Bull markets are typically ended by economic downturns, but the global economy is enjoying broad, synchronised growth.

This favourable economic backdrop means even market bears such as Grantham see a late-cycle melt-up as a distinct possibility. The “touchy-feely measures of market excess” – increasingly optimistic press and TV coverage, increased hype over market “heroes” like Amazon, bubbly moves in other asset classes – are only now “falling into place”, says Grantham.