Are private school fees really the best way to spend your hard-earned cash? 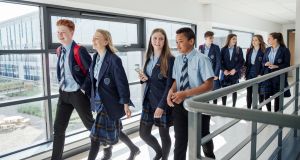 For many parents, it’s a foregone conclusion; either they don’t have the funds at all, or are so well-off that it’s simply not an issue. For many others however, opting to pay for primary or second-level school for their offspring is a serious decision that requires thought beyond just accessibility to certain sports activities, subject choice or school facilities.

For US-born financial adviser Karl Deeter, the main advantage of a private school education can be the network you build.

“That is the value you build and you can’t buy,” he says, adding that in Ireland, it “has a lot of weight behind it”.

“As an outsider, I’ve come to realise how serious that network is.”

By not opting for private school for their two children, a typical couple living in Dublin could save themselves more than €50,000 in interest on their mortgage

But, while many parents might be blinded by the desire to “do the best” by their kids, financial considerations can have a long-term impact on the financial health of the parents, and their ability to retire by a certain age.

Could you be putting your own financial health at risk by offering your children the private school experience? And could you do more for your child later in life by not spending now?

Well, as our study below shows, by not opting for private school for their two children, a typical couple living in Dublin could save themselves more than €50,000 in interest on their mortgage, as well as shaving more than five years off the term.

And the longer the children are in private school, the greater the fees, and the more children they have, the greater impact not opting to pay can have on a family’s financial health.

And not only that, but our fictional family could be forgoing a guaranteed income of about €7,000 extra in retirement by paying for two children to go to private school. Or a deposit for a property for their child; or enough money to sustain that child throughout a university degree, masters and potentially PhD?

So how can they make the best decision?

While there are plenty of private second-level schools all around the State, they tend to predominate in urban areas such as Cork (Scoil Mhuire, Bandon Grammar, Presentation etc); Limerick (Glenstal College, Villiers) and, of course, Dublin. And within Dublin, the vast majority of private schools tend to be on the southside, with only a handful, such as Belvedere and Sutton Park, north of the Liffey. Choosing private schooling or not tends to be more of a consideration for parents living close to these schools.

And as the economy has grown, so too have fees.

At Wesley College in Dundrum for example, fees are now around €6,550 a year, rising to €7,534 at Alexandra College in Milltown or €5,700 in the Catholic University School.

Of course we’re not even considering the top of the range Nord Anglia, where fees will be as much as €24,000 for the coming academic year.

For financial adviser Eoin McGee, owner of Prosperous Financial Services, it’s a decision that should only be made – at least for those who aren’t super wealthy – in the context of an overall financial plan. “It’s a really difficult one to decide on,” he says, adding that, if you have the money and want to, “then go for it”.

But if you’re struggling to make the sums work out, you might need to think twice. “If you don’t have unlimited amounts of money you need to consider where is it best spent?”

One danger is that you pay for second-level fees “when you haven’t got college boxed off”.

“People often underestimate the cost of college,” he says, noting that costs have been estimated at about €7,000 a year for a student living at home, and €12,000 away. If you’re not prepared for this, McGee notes, you might not be then able to give your kids “the college life they might need to have”.

So if you think they’re going to the college down the road to study X, but they want to move to another town or city to study Y, you’re going to need more money than you might think.

Or should the money go towards your pension? McGee cites a recent client who was preparing to take the cheque book out for private school but whose pension was “miles off” where it should be.

“You need to consider the long-term impact of financial decisions,” he advises.

Fees – or pay down your mortgage

Let’s consider a family living in Dublin with two children in a house worth €660,000. They recently switched their mortgage, having drawn down additional funds to do it up, and now owe €400,000 over 25 years, at a rate of 2.7 per cent. Their monthly repayments are currently €1,835.

The parents are aged 43 and 42 respectively, with the eldest child starting secondary school this year, and the second, currently in fifth class, in 2021. They expect to pay off their mortgage in September 2044, when they will be aged 68 and 67, respectively. So, they could be set to bring this mortgage into retirement with them.

If our couple put the money originally destined for fees into their mortgage each September, after six years, they will have saved themselves more than €24,000 in interest

But what if this family opt for the local secondary and pay down their mortgage instead of the pricier private option?

Of course, the big “if” with our study is that parents actually need to put the money that would otherwise have been spent on fees into a mortgage/pension, rather than seeing it being absorbed by everyday household expenses. We’re also seeing interest rates as steady, when they could continue to fall or jump substantially.

If our couple put the money originally destined for fees into their mortgage each September, after six years, they will have saved themselves more than €24,000 in interest as well as cutting two years and seven months off the term of their mortgage! Crucially, this means that they will be closer to paying down their mortgage by the time they retire.

And what if they had two children in private school? What impact would this have?

Well, if they had put the €63,080 or so (fees for two children) into their mortgage, they would save themselves a whopping €52,305.44 in interest they would otherwise have had to pay their bank. Not only that, but they would now be mortgage-free five years and two months earlier, giving them plenty of scope to divert these mortgage repayments into their pension at this point.

Fees – or a deposit on a house

For many parents, paying for a private education is a way of giving their child a leg-up in life. But as Deeter notes, it’s not the only way. A Harvard study he cites finds that there are three ways of generating wealth; 1) education; 2) being in a couple; and 3) buying a home.

Given that figures repeatedly show how inadequate the vast majority of our pensions are, plugging the gap now could really reap rewards when you retire

“To a degree, I wonder if people should, instead of looking to a private education, see if there’s a way of getting a house [for a child],” he says.

By putting money towards a deposit on a first home, rather than towards school fees, parents could be helping their children get on that ladder earlier. A €30,000 deposit for example, could help their child buy a home worth €300,000 based on a 10 per cent deposit.

Fees – or bump up your pension

Another option is to bump up your pension by putting the money you would otherwise have spent on fees, into your retirement pot.

Given that figures repeatedly show how inadequate the vast majority of our pensions are, plugging the gap now could really reap rewards when you retire. In addition, your pension contribution will actually be worth more than your school fees cost, as you will benefit, up to certain age-related limits, from tax relief each time.

Now the big “if” with this part of the study is if the pension fund returns anything at all; as some savers will attest, poor performance and high fees can eat away at potential gains.

But what if our couple had already saved the €31,540 needed for one child’s private second-level education, and put this into their pension pot as a lump-sum (provided it doesn’t mean that they are exceeding their age-related tax relief, which, at the age of 40-49 is 25 per cent of income?

If the latter amount was then put into an annuity, even with annuity rates at their historic lows, it would generate an income of €4,027 a year based on an annuity rate of 3.8 per cent for a 66-year old. And, who knows? By the time we get to retire, the annuity rate could be considerably better.

But what if they had considered paying for two kids to go to private school? If they put this €63,080 into their pension fund, it would only “cost” them €37,878, thanks to the tax relief available.

As McGee notes, “That’s the opportunity you’ve lost out on”.

1 House asking prices rebound but will likely fall again - MyHome
2 Plans for €2bn Dart expansion lure Bombardier to Dublin
3 TV guide: Pros and cons of broadcast television options
4 Google tells workers to return to country where they are employed
5 Ireland has among highest rates of home-working during Covid
6 There may be trouble ahead for the housing market
7 Commercial landlords urged to make ‘concessions’ to struggling businesses
8 AIB launches €300m social housing fund
9 Karlin Lillington: Ireland spent months discussing pubs but not arts venues
10 Irish food trade could slide by one-third if EU and UK fail to cut deal
Real news has value SUBSCRIBE
Save money on international transfers