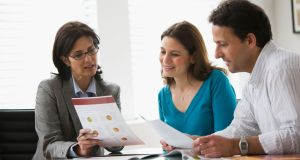 Aviva, Irish Life, New Ireland Assurance and Standard Life would be among those offering commission and other incentives to brokers to sell their products. Photograph: Getty Images

Free rugby tickets, golf trips and days out at Croke Park will all be banned under new rules from the Central Bank on how financial brokers can be paid for advising and selling financial products to consumers. While the Central Bank has stopped short of banning commission, in a set of new rules published today, it does impose new requirements on how brokers can be remunerated.

The regulator said the goal of the new rules, which will apply from March 31st, 2020, was “to minimise the risk of conflicts of interest” that can apply when a financial broker earns commission on selling insurance and investment products on behalf of a financial services firm.

In short, the rules mean that brokers will now have to publish details of the commissions they receive from life and investment companies on their website. They won’t be able to describe themselves as being “independent” if they accept commission, and commission linked to volumes or targets will be banned.

In addition, free hospitality gifts such as sporting trips will be prohibited. Checking this will be the Central Bank of Ireland, which will able to request details of any non-monetary benefits a broker has received.

Aviva, Irish Life, New Ireland Assurance and Standard Life would be among those offering commission and other incentives to brokers to sell their products.

Gráinne McEvoy, director of consumer protection at the Central Bank, said the new rules would provide much-needed transparency around commission payments, allowing consumers to see what commission payments their financial advisors are getting for the products they are recommending.

“It is important that consumers are clear about the price they are paying for financial services,” she said, adding that the new rules would reduce the potential for bias on the part of financial intermediaries and provide consumers with access to more information about how intermediaries are paid.

The new rules have been broadly welcomed by the industry. Diarmuid Kelly, chief executive of Brokers Ireland, which represents 1,200 brokers across the country, said he was “glad to see” that the regulator didn’t follow the UK’s approach by banning commissions outright.

“Commission is very beneficial in terms of the widespread availability of financial advice,” he said, adding that banning it “restricts advice to the well-off” or results in a so-called advice gap.

However, he expressed concern that the requirement to disclose all the commission arrangements a broker might have could lead to a “tomb of a document” and prove to be unworkable.

“They’re really ramping up the paperwork with very little benefit for consumers,” he said.

Fee-based adviser David Quinn of Investwise Financial Planning, however, said that while the new rules would benefit consumers, he was “very disappointed” that the Central Bank didn’t go further. “I would have loved to see a much more aggressive commission ban,” he said.

Under the new rules, advisers will also be precluded from describing themselves as “independent” if they accept commission as a means of payment for advice. However, Mr Quinn said this rule will likely mean that there won’t be “one single firm” in Ireland that will be able to call itself independent, due to legacy commission.

1 Admission of mistake in Oxford vaccine dose raises doubts over reliability
2 Cliff Taylor: Deal or no deal we are now heading for a hard Brexit
3 Move to EU or face disruption, City of London is warned
4 Last orders for Rí-Rá nightclub and The Globe after green light for Central Hotel revamp
5 Karlin Lillington: How I managed to cut my mobile phone bill by at least half
6 Fiona Reddan: Who’s afraid of Revolut? Not AIB and BOI it seems
7 Fenergo named Irish technology company of the year
8 Longboat Clinical acquired in multimillion euro deal
9 Irish Life fund pays €49m for 94 Dalkey apartments
10 An Post parcel volumes to hit weekly record of 3.3m
Real news has value SUBSCRIBE
Save money on international transfers