Are Buffett and Dimon right about stock market short-termism? 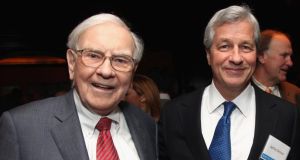 Financial markets have become too focused on the short term, according to celebrated investor Warren Buffett and JP Morgan chief executive Jamie Dimon. The pair recently issued a joint statement calling for companies to abandon the practice of issuing quarterly earnings guidance, saying it was a “major driver” of this short-termist trend and was contributing to a shift away from long-term investments.

Is it time to say goodbye to quarterly profits guidance? Are markets becoming increasingly short-termist? Or are Buffett and Dimon exaggerating the scale of the problem, as some critics maintain?

During earnings season, a raft of US companies issue their profits and sales forecasts for the coming quarter. This information shapes the outlook of Wall Street analysts, who produce their research reports and issue “buy” and “sell” recommendations for the various stocks. Unsurprisingly, investors pay close attention to what companies have to say: in April, shares in Caterpillar plunged and the overall stock market sold off after the global manufacturing giant cautioned its first-quarter profits would likely be the “high water mark” for the year.

The problem, Buffett and Dimon argued in a Wall Street Journal opinion piece earlier this month, is that quarterly earnings guidance “often leads to an unhealthy focus on short-term profits rather at the expense of long-term strategy, growth and sustainability”.

All kinds of factors outside companies’ control – commodity price fluctuations, market volatility and even the weather – can affect earnings. Consequently, companies “frequently hold back on technology spending, hiring, and research and development” in order to meet expectations and to avoid the hit to share prices that can result from earnings misses.

This is not the first time Buffett and Dimon have complained about the practice. Buffett has spent his career warning of the dangers of short-termism and Berkshire Hathaway, his investment vehicle, has never issued earnings guidance. Dimon, the chairman of Business Roundtable, an association of chief executives of leading US companies, complained in typically blunt fashion in February that earnings guidance was “stupid”, saying it was inherently difficult to forecast earnings accurately and that it incentivised companies to massage the numbers.

Nor is guidance necessarily aimed at short-term investors. Without guidance, some argue, management could issue vague statements as to their long-term plans. In contrast, guidance is a monitoring tool that allows investors to keep tabs on company management, one that allows them to assess if executives are carefully executing their plans.

Buffett and Dimon have proven over their long careers that their shareholders can trust them, but this is not necessarily true for many other Business Roundtable companies, suggests Bloomberg columnist Matt Levine. The recent statement, adds Levine, is “very self-serving coming as it does from a group of CEOs”.

Still, many see the case for quarterly guidance as an increasingly tenuous one. Research from management consultancy McKinsey indicates guidance doesn’t reduce share price volatility or affect valuation multiples. Instead, it takes up valuable time from management and causes them to focus too much on short-term figures.

Analysts would not miss the practice, according to the CFA Institute, an analyst body which has been calling for an end to the practice for more than a decade now. Similarly, FCLT Global, a non-profit body set up last year by various asset owners and pension funds, describes quarterly guidance as a “relic of the past”.

Were quarterly guidance to be abandoned, it appears few tears would be shed by the investment community.

So does the focus on quarterly profits drive short-term behaviour? Certainly, a Duke University survey of 400 chief financial officers suggests short-term pressures can indeed drive bad decisions, with 80 per cent saying they would cut discretionary spending to meet an earnings target and more than half saying they would sacrifice a sound long-term project in order to hit their quarterly target.

However, Buffett and Dimon’s claim that markets have “become too focused on the short term” appears exaggerated in some key respects. Firstly, the practice of quarterly guidance has been declining for years now. Just over a quarter of US companies now issue quarterly guidance, down from 36 per cent in 2010. In Europe, almost no companies offer quarterly guidance.

Secondly, Buffett and Dimon claim “short-term-oriented capital markets have discouraged companies with a longer-term view from going public at all, depriving the economy of innovation and opportunity”. This appears to be a reference to a 2017 Credit Suisse report, The Incredible Shrinking Universe of Stocks, which noted the number of publicly-traded US companies has more than halved over the last two decades.

However, more recent Vanguard research has found most of the publicly traded companies that dropped off the indices have been micro-cap names. A huge number of micro-cap companies went public during the late 1990s technology bubble, but that has changed. Today, instead of going public, smaller companies are increasingly acquired by larger companies or by private-equity firms, says Ben Carlson of Ritholtz Wealth Management.

Furthermore, the number of large-, mid-, and small-cap stocks has remained “relatively stable since the 1970s”, indicating the declining number of stocks in the overall US market is “something of a non-story”.

Importantly, the lofty valuation multiples afforded to companies such as Amazon, Netflix and Tesla, all of which have eschewed short-term profits in favour of reinvestment for future growth, indicates markets are often perfectly willing to take a long-term view. Indeed, markets often substantially overvalue the long term, argues Harvard law professor Mark Roe, as evidenced by the intermittent bubbles in technology and other industries.

The frequency of such occurrences tells us markets are not uniformly short-term, says Roe.

The problem of short-termism has been “woefully exaggerated”, according to Roe, who has authored a number of studies on the subject. His latest paper, Stock Market Short-Termism’s Impact, notes the five American companies “most strongly supported” by the stock market – Amazon, Apple, Alphabet (Google), Facebook and Microsoft – are “all quintessential long-term companies”.

Roe argues the “doomsday version of the stock-market-driven short-termism argument” – firms forgoing the research and development they need and cutting back on capital expenditures so that they can instead support their stock price via expensive share buybacks – is not supported by evidence. Yes, buybacks have risen over the last decade, but companies did not do so by draining their cash reserves: they took advantage of historically low interest rates that allowed them to borrow nearly for free.

“The brute fact is that American R&D expenditures are not declining,” he adds, with R&D spending as a proportion of gross domestic product rising since the 1970s. Capital spending has declined, but this is a “worldwide phenomenon not an American one; firms that lack American-style stock market pressures in Germany, Japan and the rest of developed Europe and Asia are not outpacing America in capital expenditures”.

Buffett and Dimon may well be right in saying that quarterly guidance is a bad idea. However, the alarm about market short-termism might well be “overblown”, says Roe, “pushed rhetorically by corporate executives and their representatives as justifying according executives and boards yet more autonomy from shareholders”.

1 Basic income for all: Has the Covid crisis given us a new economic model?
2 ‘I don’t need to do any of this. . .I don’t actually need to work.’
3 Promontoria barred from pursuing doctor over Ulster Bank loan
4 Only way is up for Stripe as valuation skyrockets
5 Admission of mistake in Oxford vaccine dose raises doubts over reliability
6 AIB revives €1bn-plus problem mortgages sale
7 AIB’s mortgages sale, Brexit warnings and wherefore Ulster Bank?
8 Fiona Reddan: Who’s afraid of Revolut? Not AIB and BOI it seems
9 ‘Make plans but don’t hold on to them too seriously’
10 Kinzen raises $2.2m as it helps clients fight ‘misinformation’
Real news has value SUBSCRIBE
Save money on international transfers