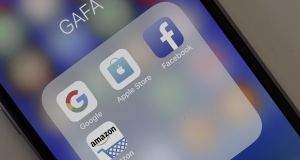 The combined value of Facebook, Apple, Amazon, Microsoft and Alphabet – the FAAMGs, as they are sometimes known – is just shy of $4 trillion. Photograph: Chesnot/Getty Images

High-flying technology stocks continue to defy the doubters. Although 2018 has been a testing year for most investors – the MSCI World Index has been flat, while the S&P 500 remains well shy of its January highs – technology stocks have done very nicely indeed, with the NYSE FANG+ index up more than 20 per cent.

A whole host of the biggest names in the sector continue to defy the law of large numbers.

Apple, the world’s most valuable company, is fast closing in on a $1 trillion valuation after a double-digit percentage gain. The combined value of Facebook, Apple, Amazon, Microsoft and Alphabet – the FAAMGs, as they are sometimes known – is just shy of $4 trillion. As Bloomberg noted earlier this month, that’s more than the annual gross domestic product of Germany, and all the companies in Japan’s stock index, the Topix.

The continued tech advance has been led by some of the most expensive names in the industry, such as Netflix and Amazon, which have already posted gains of some 90 and 40 per cent respectively in 2018.

For some time now, many sceptical investors have warned this was unsustainable, pointing out a great company is not necessarily a great stock.

Marks was especially wary of Netflix, saying “positive investor sentiment” had driven its valuation to $70 billion, despite the company burning through cash at a “prodigious” rate. That “prodigious” cash burn has continued but Netflix is now worth more than $150 billion, more than traditional media giants such as Disney and Comcast.

That might seem remarkable to many, given that Comcast reported $85 billion in revenues last year (roughly seven times Netflix’s sales) and $22 billion in profits (40 times greater than Netflix’s). However, bullish Netflix investors might well be right, suggests Ritholtz Wealth Management chief executive and Reformed Broker blogger Josh Brown. He says that citing a high or low valuation ratio “is like remarking on the fact that it’s cold in Antarctica and hot in Africa”.

Stock prices “are a proxy for our beliefs about the future”, says Brown, and investors are more interested in the future than the past. Hence, investors continue to see expensive growth stocks such as Netflix as a good bet.

Many strategists see technology valuation concerns as overblown. Veteran market strategist Ed Yardeni argues that today’s technology giants boast revenue and earnings growth that justifies their hefty valuations. Facebook, notes Yardeni, has grown its revenues by almost 50 per cent over the last year, while Alphabet reported revenue growth of 24 per cent. That’s echoed by Goldman Sachs, which says that, unlike the 1990s dotcom bubble, the success of technology stocks in recent years is largely explained by “strong fundamentals, revenues and earnings rather than speculation about the future”.

The stellar fundamentals boasted by the top technology stocks mean comparisons with the late 1990s technology bubble are misplaced. A more pertinent comparison, perhaps, would be with the so-called Nifty 50, a group of growth stocks that became the darlings of institutional investors in the early 1970s. The 50, which included names such as IBM, Polaroid, McDonalds and Coca-Cola, were often called one-decision stocks – once you bought them, you never had to consider selling, because their prospects were so bright.

Heady investor sentiment meant that, by 1972, the Nifty 50 traded on 42 times earnings, more than double that of the S&P 500. The conventional wisdom is that this set the scene for the disappointment that followed; stocks such as Xerox, Polaroid and Avon all fell by between 70 and 90 per cent during the 1973-1974 bear market.

However, the Nifty 50 story may be a bit more complex than that, according to research conducted by high-profile finance professor Jeremy Siegel. Coca-Cola may have looked expensive at 46 times earnings in 1972, but Siegel notes it went on to generate annualised returns of almost 17 per cent over the next quarter of a century.

Yes, many companies failed to live up to expectations, but many others “were worth far more than even the lofty heights that investors bid them”, writes Siegel. “Investors should have paid 68.5 times the 1972 earnings for Philip Morris instead of the 24 they did pay, undervaluing the stock by almost three-to-one. Coca-Cola was worth over 82 times its earnings, and Merck should have sported a multiple of more than 76.”

Overall, someone who bought the Nifty 50 at the seemingly heady market peak of 1972 would have earned annualised returns of 12.5 per cent over the next 26 years, only slightly below that generated by the S&P 500.

In other words, the Nifty 50 story has been simplified and distorted. A very high valuation multiple doesn’t necessarily mean a stock is overvalued: often, growth stocks surpass heady expectations, which will be music to the ears of those who have bet that the future belongs to the FAAMGs and their fellow high-fliers in the tech sector.

Still, the Nifty 50 is not proof that valuation is irrelevant, with Siegel noting there is “also a value-oriented theme hidden in the dazzle of these growth stocks”. The Nifty 50 was not a homogeneous group, with some stocks much more expensive than others. The 25 stocks with the highest valuations traded on 54 times earnings, according to Siegel’s data, while the remaining 25 averaged price-earnings ratios of 30.

Importantly, the expensive group yielded only about half the subsequent return of the cheaper group. While some expensive stocks are clearly “worth their weight in gold”, all too few “live up to their lofty expectations”.

The same point is made by Fortune Financial’s Lawrence Hamtil, who concludes that the best performers were generally those with “less demanding valuations”.

Similarly, while the FANGs make for a neat acronym, the technology stocks dominating today’s market are a disparate group. The biggest, Apple, trades at a discount to the S&P 500, while Facebook and Alphabet are also relatively inexpensive. Amazon and Netflix, on the other hand, trade on eye-watering valuation multiples.

Will they justify their elevated valuation multiples? Perhaps – the Nifty 50 example shows growth stocks often do live up or even surpass expectations, so a basket of technology stocks might well continue to outperform over the following years and decades.

However, it also shows investors “should always be conscious of starting valuation when placing their bets”, says Hamtil. This is true “no matter how revolutionary the new business appears to be, and no matter how much potential you believe it has”.

1 Basic income for all: Has the Covid crisis given us a new economic model?
2 Online shoppers face unwelcome tax surprise
3 ‘I don’t need to do any of this. . .I don’t actually need to work.’
4 How long can Government afford to keep State pension age at 66?
5 Promontoria barred from pursuing doctor over Ulster Bank loan
6 Only way is up for Stripe as valuation skyrockets
7 Pandemic brings a halt to Zara-owner’s Irish expansion
8 How a Dublin teenager is helping you bring your secrets to the grave
9 Sherry FitzGerald aims for bigger share of broker market
10 First-time buyers: It’s cheaper to buy than rent, but do the sums
Real news has value SUBSCRIBE
Save money on international transfers