Market Watch: The odds are being stacked against gambling with regulation tightening 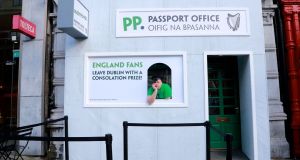 Paddy Power’s pop-up ‘passport office’ on the day of the Ireland versus England rugby match.

Paddy Power Betfair’s chief executive of a little over a year, Peter Jackson, had hoped the group’s unhappy experience of disappointing earnings, executive exits, and share sell-offs since its creation by merger in 2016 was behind it as he reported slightly better-than-expected full-year figures on Wednesday.

Earnings before interest, tax, depreciation and amortisation (ebitda) at the gambling giant had edged up slightly to £475 million (€553.7 million) to beat market estimates by £6 million.

The Paddy Power brand staged something of a turnaround in 2018, capturing market share in the UK and “regaining its mojo”, according to Mr Jackson.

Revenues at Betfair, operating in more than 100 markets internationally, advanced 4 per cent.

The name Flutter Entertainment plc couldn’t be more tone deaf, at a time when the entire gambling industry is already suffering from an image problem

A US deal, announced within a week of the US Supreme Court striking down a federal law against sports betting in May, had delivered a 35 per cent share of the New Jersey online market by the end of 2018.

The US market potential “is huge” as more states legislate to allow sports betting and punters move from illegal betting to regulated online sites, Mr Jackson told analysts during a presentation. (Though it seems that many investors have only started to assess to the cost of investment in the US, serving to push the stock down more than 11 per cent in the past three days, to levels last seen before the Betfair merger was announced.)

As the group becomes more global and its stable of brands continues to expand, Mr Jackson said that it was “imperative” to rebrand the corporate name. To do so, it has delved into Betfair’s past and pulled out the name Flutter, a brand the company acquired through acquisition in 2001.

“It didn’t cost us anything with branding consultants,” boasted Mr Jackson.

For a company that spends millions on marketing and advertising every year, it might have been money well spent if it had brought in some experts.

The name Flutter Entertainment plc – which shareholders will get a chance to vote on in May – couldn’t be more tone deaf, at a time when the entire gambling industry is already suffering from an image problem.

Regulators and taxmen are tightening the net, mindful that global gambling revenues have jumped by about 11 per cent over the past five years to $450 billion (€400 billion), according to industry research firm H2 Gambling Capital.

A doubling of Irish betting tax to 2 per cent of turnover from the start of this year would have cost the group another £20 million (€23 million) in 2018.

The wind is blowing one way. In the UK, the Labour Party’s deputy leader, Tom Watson, with one eye on the next general election, last month proposed much tighter curbs on online gambling, further unsettling much of the industry.

Some, like Sky Betting & Gaming executive chairman Richard Flint, are working with the inevitable.

Mr Flint added that the gambling industry has been through a “cultural change” in recent years, particularly during the UK government’s drawn-out efforts to lower the maximum stake for fixed-odd betting terminals (FOBT) from £100 to £2 (€115 to €2.31), which takes effect next month.

“The combination of a better understanding of the issues and the threat of higher regulation and taxation has meant that the bigger firms are up for this and have to handle the problem in a way we haven’t in the past.”

While gambling firms may see a drop in online revenue as they are forced to look more closely at whether customers can afford the bets they’re placing, Mr Flint said that the decline would likely come from the type of people bookmakers should be trying to help.

“We interact with circa 70,000 online customers per month regarding their activity, with our specialist team making circa 1,200 responsible gambling calls, often suspending accounts if we are not satisfied a customer is in control,” the group said in its results statement.

The group’s planned new name, however, jars with that agenda. It should be ditched as quickly as punters will bin betting slips for also-rans at next week’s Cheltenham festival.