Ireland moves up rankings of women in workplace 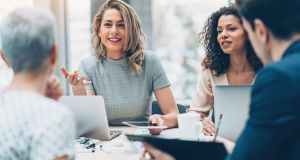 Ireland has improved the representation of women in the workplace, recording the largest gain in rankings across the OECD, a new report has found.

PwC’s Women in Work Index ranked Ireland 17th in the list of 32 countries, an improvement of seven places on the previous year’s ranking and putting Ireland above the OECD average.

The PwC report, which looked at the representation and welfare of women in the world of work across 33 OECD countries, ranked Iceland and Sweden as the two top performing countries, with New Zealand in the top three for the first time since the index began in 2013. Slovenia overtook Norway in the latest rankings, leaving the latter in fifth place.

The overall report found that improving female participation in work across the OECD region could boost total gross domestic product by $6 trillion, and stood to gain $2 trillion by closing the gender pay gap.

“This marks yet another year of continued steps to improve the representation and welfare of women in the world of work. But progress remains slow,” said Yong Jing Teow, senior economist at PwC. “While organisations are now far more aware of the commercial imperative of improving diversity and inclusion in their organisations, real and effective change remains elusive for many. Effective change within organisations requires a mix of strategic clarity, accountability, measurability and transparency.”