Chief executive is concerned over Sinn Féin’s proposed No Consent, No Sale Bill 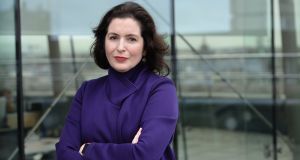 Bank of Ireland’s shares have slumped by about 30 per cent since chief executive Francesca McDonagh unveiled ambitious medium-term plans last June – making it the worst-performing Irish banking stock over the period.

Analysts and investors wasted little time raising issues with the group’s ambitious target to increase its UK loan book by 10 per cent and double its profitability – measured as return on equity – by 2021 by venturing into riskier parts of the mortgage market such as higher loan-to-value loans to first-time buyers and equity-release offerings to seniors.

It’s all part of a group aim to grow its total loan book by 20 per cent, cut costs by €200 million to €1.7 billion amid a €1.4 billion information technology (IT) overhaul and restructuring plan, and boost returns.

The entire project is premised on the UK exiting the European Union at the end of next month with a withdrawal agreement and transition arrangements in place. Whether either can be achieved is anyone’s guess at this stage. No wonder investors are reticent.

The group flagged last year that it was looking at selling its €600 million UK credit cards portfolio, giving how draining this portfolio is on capital. However, its ability to do so – and at an acceptable price – will also also come down to the outcome of Brexit negotiations in the coming weeks.

At group level, while the loan book increased by a net €1.3 billion last year to €77 billion, marking its first expansion since the financial crisis erupted a decade ago, small- to medium-sized enterprises (SMEs) are largely refraining from taking out new borrowings as they fret about Brexit, bank executives said on Monday.

Meanwhile, although Bank of Ireland cut non-performing loans (NPLs) from 8.3 per cent of its portfolio in the Republic to 6.3 per cent over the course of last year – giving it the lowest NPLs ratio in the State – it’s now into the really tricky cases.

The group highlighted to analysts that up to €800 million of soured buy-to-let loans could either be put up for sale or refinanced on bond markets through a so-called securitisation deal.

It is the last among the five surviving retail banks in the Irish market to entertain mortgage sales, as regulators pile pressure on lenders to lower their NPLs ratio to the European Union average, which stands at 3.5 per cent.

However, it comes at a time when the Oireachtas is considering a Sinn Féin Bill that would prevent banks from selling loans without borrowers consent.

McDonagh voiced her opposition to the proposed No Consent, No Sale Bill 2019 at a briefing post the publication of its full year results. She said it would impede a lender’s ability to meet regulators’ NPL reduction demands, tie up capital in soured loans that could otherwise support new lending, and dissuade new entrants from looking at the market.

“There’s an element of irony here. That sort of level of intervention, if it were to become law, would dis-incentivise the very competition that politicians want to encourage,” she said. “It would effectively be a barrier to entry.”

A banker looking for more competition is a rare thing and speaks for how rattled the sector is by the Bill.