A US tariff on European car imports could cost German auto giants €6.25bn a year 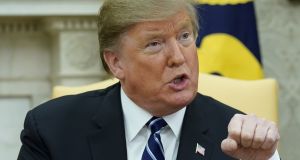 As Donald Trump faces a series of legal actions after invoking a natural emergency to build his wall along the Mexican border to stem what he calls an invasion of “drugs, traffickers and gangs”, the US president is turning his sights back to another set of “bad hombres” – or “schlechte Typen”.

“The Germans are bad, very bad,” Trump said during a meeting with the European Commission president Jean-Claude Junker and European Council president Donald Tusk in May 2017. “See the millions of cars they sell in the US? Terrible. We will stop this.”

Last weekend, his commerce secretary Wilbur Ross – best known in Ireland for having made a pile buying and selling a stake in Bank of Ireland during the financial crisis – sent a report to the Oval Office on whether foreign car imports constitute a “national security risk” for the US.

It may give Trump the cover he needs to slap his long-threatened 25 per cent tariffs on European car imports. He has less than three months to act.

Number-crunchers in US investment bank Evercore ISI reckon such a levy would cost Germany’s three auto giants – Volkswagen, Mercedes-maker Daimler and BMW, which between them account for more than half the value of all European cars sold in the US each year – about €6.25 billion per annum.

It would be a further blow to an industry that’s been spinning in mud in recent times.

European auto stocks had an annus horribilis last year, slumping 23 per cent amid a slowing global economy, the rising cost of the “Dieselgate” scandal that erupted in 2015, tougher emissions regulations in September that brought German car production to a temporary halt and mounting concerns about the trade implications of a hard Brexit.

The US sector didn’t fare much better, dropping more than 18 per cent, with Ford reporting earlier this month that its 2018 profits fell by more than 50 per cent as it racked up hundreds of millions of dollars of losses in China and Europe. General Motors’ earnings slipped 8.3 per cent.

Meanwhile, research and development costs are mounting as the industry prepares for its biggest revolution since Henry Ford unveiled the Model T in 1908. Global carmakers are planning to spend about $300 billion (€264.5 billion) over the next five to 10 years on electric vehicle technology, according to a recent study carried out by Reuters. Further tens of billions are being devoted to developing self-driving cars and other automation and digital projects.

The road ahead is lined with potholes. Take Tesla, the world’s first independent global electric car group, whose shares tumbled last year when the group struggled to mass produce its Model 3 sedan, preceding a very public meltdown by its chief executive, Elon Musk, that played out on Twitter and the financial pages.

Tesla shares dropped as much as 4 per cent on Thursday after influential US magazine Consumer Reports pulled its recommendation of the Model 3, citing its declining reliability. “Consumers expect their cars to last – and not be in the repair shop,” said the publication’s senior director of automotive testing, Jake Fisher.

Established carmakers that have put pedals to the metal chasing a rapidly evolving market know all too well that billions of euro of shareholders’ money will be wasted on R&D that’ll never make it to an assembly line.

Daimler and BMW announced on Friday that they would invest more than €1 billion on a joint ride-hailing, parking and electric car-charging business to take on the likes of upstarts Uber, Lyft and other technology firms. Whether it’ll deliver a return is anyone’s guess. But staying in neutral is not an option.

Still, investors have decided – for the moment at least – that it’s time to come in from the hard shoulder, sending European car stocks up more than 10 per cent so far this year, while the US industry has edged up some 6 per cent.

A Trump tariff, aimed at bolstering the likes of Ford, GM and Tesla, would likely kill the rally on both sides of the Atlantic, with the European Union warning on Monday its retaliation would be “swift and adequate”.

German carmakers’ struggles helped to push Europe’s largest economy to the precipice of recession late last year and debt ratings agency Moody’s estimates US tariffs could shave 0.2 per cent off the country’s gross domestic product. Others are predicting twice the impact.

This would undoubtedly add fuel to calls for the European Central Bank to further delay its first rate hike since 2011 until well into next year.

It may also further stir Germany’s protectionist impulses. Berlin’s enthusiasm for an EU-wide digital tax, aimed at US tech giants, began to cool late last year when it became apparent that its carmakers could be ensnared as their digital revenues increased.