Profit at bookmaker jumps 19 per cent to €440 million 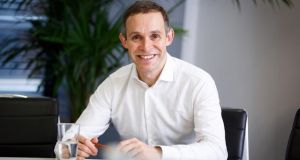 Paddy Power Betfair chief executive Peter Jackson said that since February 2016 the group had focused on bedding down the merger of that had created the business.

Paddy Power Betfair will spend more than €20 million extra in 2018 to win back punters lost as it worked through the merger that formed the group over the last two years.

The group acknowledged that Paddy Power had lost market share, with its sports betting revenues growing 3 per cent in 2017, against Betfair’s 11 per cent increase in the same year.

Paddy Power Betfair intends to spend an extra £20 million this year on winning new customers and keeping existing clients to tackle this. It will skew that investment towards its Paddy Power brand.

Recently-installed chief executive Peter Jackson pointed out that since February 2016 the group had focused on bedding down the merger of Paddy Power and Betfair that created the business.

“For the last two years we have not had any product development for the customers,” Mr Jackson said.

He added that it intended to have new betting products and apps ready for this year’s World Cup, which kicks off in June.

In the more immediate future, both Paddy Power and Betfair will offer a range of special offers designed to lure punters during next week’s Cheltenham National Hunt racing festival, which begins on Tuesday.

“We are starting to close down those gaps with our competitors,” the group’s chief executive added.

This week’s confirmation that chief financial officer Alex Gersh is leaving is not linked to the shift in management structure.

“I will be very sorry to see Alex go,” Mr Jackson said. He added that there were no cultural issues behind the departure of a number of key figures.

The group is proposing to increase its dividend by 21 per cent to 200p per share. Paddy Power Betfair had £244 million cash on December 31st, 2017.

Mr Jackson said Paddy Power’s Betfair was well positioned to deal with fiscal changes expected in the UK, Australia and the US.

6 Trade with Britain will not return to pre-Brexit model, exporters warned