More than €100bn in Russian money funnelled though Dublin

Seen & Heard: Ryanair and Aer Lingus to cross-sell tickets and INM to get chairman 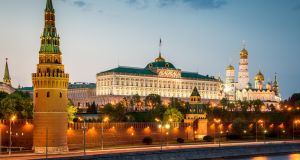 A study by two academics from Trinity College Dublin has found that more than €100 billion has been “funnelled” since 2007 through the International Financial Services Centre to Russian-linked companies, the Sunday Business Post reports. The research findings state that so-called section 110 tax-efficient vehicles in Dublin are connected to many state-linked Russian companies, such as oil giant Rosneft and Kremlin-linked bank, VEB.

The Post also reports that the London Metropolitan Police have opened an investigation into Irish charity-tech firm Ammado and its founder, Peter Conlon, who is in custody in Switzerland “amid allegations of embezzlement”. More than €3.5 million was collected from the public for charities by Ammado’s payment system, but had not been handed over before Ammado collapsed. The Met investigation comes on foot of a complaint by a British charity.

Paschal Donohoe, the Minister for Finance, has told Irish tax practitioners that the price of certainty for the Irish tax system is prioritising “legitimacy”, in what is being seen as a warning to the industry against aggressive avoidance schemes. The comments were made last week in a speech to the Irish Taxation Institute, the Sunday Business Post reports.

Long-standing rivals Ryanair and Aer Lingus will soon begin selling tickets for each other’s services on their respective websites, The Sunday Times reveals. The paper says both airlines have signed heads of agreement on a cross-selling deal that will see customers from Ryanair’s European network able to connect on to the Aer Lingus transatlantic network from Dublin.

Independent News & Media (INM) has backed away from the rumoured appointment of Paul Connolly, a nominee of major shareholder Denis O’Brien, as its new chairman to replace Leslie Buckley. It now appears set to appoint former Telegraph Group executive Murdoch MacLennan, who joined the INM board last week. The Sunday Times says the decision has been taken to appoint an independent chairman and that MacLennan’s ascent will be rubber-stamped at a board meeting this week.

Hammerson, the UK group that owns 50 per cent of the Dundrum Town Centre, believes the rent roll on the shopping centre could rise by almost 40 per cent to €90 million by 2021, the Sunday Times says. The paper says it would “cement the mall’s position as the country’s most valuable single property”.

The Sunday Independent says Blue Insurance could be bought by a subsidiary of multinational group Zurich. It says an estimated €50 million sale of the intermediary unit is “well-advanced” with Zurich leading the way among bidders.

Carphone Warehouse looks set to “significantly scale back its network of standalone stores in Ireland”, reports the Sunday Independent. The mobile phones retailer has 82 locations in the State. Carphone, which has accumulated €50 million of losses in Ireland, told the paper it may relocate some standalone stores under the same roofs as sister brands, Currys and PC World.