Outstanding field for chief financial officer of the year

‘Irish Times’ Business Person of the Year awards: the CFOs 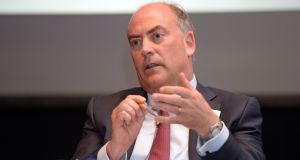 AIB chief financial officer Mark Bourke was centrally involved in delivering a successful sale of shares in the bank.

A key player in AIB’s return to the main stock markets in Dublin and London last May, , the first sale of shares since it was taken into State ownership in 2010.

The initial public offering (IPO) delivered €3.4 billion to the State, which reduced its stake in AIB to 71 per cent.

Now the bank says it is conceivable that the majority of its shares could be in private investors’ hands within three to five years – a remarkable turnaround in a decade.

Bourke has also presided over another strong year of profitability for the bank, with pretax profits at €1.6 billion and an increased dividend payment to shareholders.

Bourke began his career as a trainee accountant with PwC back in 1989, working his way up to become partner in 2000. But a lifetime in practice was not for him, and he joined financial group IFG in that same year, eventually assuming the role of group chief executive officer in 2006. He stayed with the group until 2014, when he moved to AIB, taking on the role of driving the bank’s finance agenda within a restructured and sustainable profitable organisation.

It was an audacious deal for a company itself originally spun out of a banana producer; to acquire a 45 per cent stake in the world’s largest fresh fruit group – which also generates 43 per cent of its sales from bananas.

Spun out of the Fyffes in 2006, Total Produce began trading on the Irish Stock Exchange in January 2007, and Frank Davis has been there since the start.

Now he’s one of the key players in a deal that positions the enlarged company as the world’s largest fresh produce group with almost €8 billion of annual sales. It also gives Total Produce the option to acquire all of Dole within two years.

An accountant by profession, Davis is also a qualified barrister, and joined Fyffes in 1983 having previously practised law. He later took on the role of finance director of Fyffe’s general produce division from 2002 to 2006. He was appointed chief financial officer/company secretary of Total Produce in December 2006.

In 2009 he replaced Frank Gernon as finance director, a position he has held since.

Another year of strong growth saw listed hotel operator Dalata announce more acquisitions, bring more hotels under its umbrella and grow its assets to more than €1 billion. Back in February the group reported a 75 per cent jump in pre-tax profits for 2017, and announced plans to pay dividends to shareholders from this year.

Crowley, as the deputy chief executive in charge of finance, has been instrumental in positioning the group as a major player in the hotel sector.

Last year alone it spent €129 million acquiring hotels, including 257 rooms at the Clayton Hotel Liffey Valley in Dublin, as well as the Maldron Hotel in Portlaoise. It also brought the first Clayton Hotel to Scotland and its portfolio now consists of 39 three- and four-star hotels with more than 7,351 bedrooms.

The group now has its eye firmly on the UK market, where it expects most of its growth going forward will come from.

Having qualified as an accountant with PwC in 1991, Crowley subsequently worked in Ireland and overseas with Procter & Gamble, Forte Hotels and Renault Ireland before joining the Jurys Doyle Hotel Group as head of development in 2000. During this time he oversaw the development of 15 new hotels in Ireland, the UK and the US, as well as the disposal of eight Irish hotels for €450 million.

He moved on in 2006 to Ion Equity, where he established Pillo Hotels and joined Dalata in 2012.

Since then the airline has held firmly to its Irish roots, and still proudly displays the shamrock while growing at a fair clip, despite an increasingly competitive environment from the likes of Norwegian Air.

As chief financial officer, Izzard has overseen a strong financial performance from Aer Lingus. Last year it increased its revenues by 5 per cent to €1.85 billion, with operating profit up 16 per cent to €259 million.

It added new routes to the US, including to Philadelphia, passed two million passengers on its transatlantic routes for the first time and agreed a deal with Airbus for the delivery of eight new aircraft from 2019 onwards to support the airline’s growth.

Izzard is a lifer in the airline business; she may have started her career with energy giant ExxonMobil, but quickly moved to British Airways on its graduate scheme, joining in 1996. Steadily making her way up through the organisation, through sojourns in New York, Australia and Hong Kong, she was appointed finance director of IAG Cargo in 2011, and subsequently chief financial officer at this unit in 2013. In October 2015 she got the call for the Aer Lingus job.