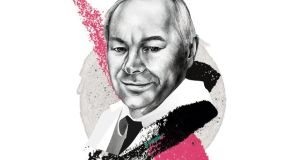 Randox Laboratories managing director Dr Peter FitzGerald is the recipient of The Irish Times Business Person of the Month Award for February, in association with KPMG.

Randox was established by Dr FitzGerald in 1982, and remains privately owned. The group employs more than 1,400 people, and has manufacturing, and research and development operations in Antrim, Donegal, India and the United States.

Dr FitzGerald receives the award after the company announced plans to invest £50 million (€56.5 million) to establish three new centres of excellence in the North that will focus on diagnosing life-threatening conditions and infectious diseases.

Scientists from the Antrim-headquartered group, which specialises in healthcare diagnostics, will work collaboratively with researchers and scientists from both Queen’s University and Ulster University in the new centres.

These will focus on clinical diagnostics, engineering for biosciences, and quality control to deliver early diagnostics for a range of conditions.

Randox has an established track record in the development of diagnostic tests to identify those at risk of certain illnesses such as Alzheimer’s disease or genetic cardiac conditions. It has also launched a new clinically-approved test to diagnose pre-diabetes.

1 Wetherspoon’s panto-villain chairman may have the last laugh
2 UK needs to be honest about its Covid-19 strategy
3 Volkswagen burning through €2bn in cash per week
4 British exceptionalism backfires in style as Johnson tests positive for coronavirus
5 Will Covid-19 force Primark to rethink decision not to sell online?
6 Rivian takes on Tesla with big batteries and subtler approach
7 Retail landlords worried rents will dry up during Covid-19 crisis
8 Remote working doesn’t suit everyone, and it exposes woolly leadership
9 Mobile, broadband suppliers to be given extra radio spectrum
10 Usit travel group in liquidation due to coronavirus crisis
Real news has value SUBSCRIBE