‘The Irish Times’ Business Person of the Month: Deirdre Somers 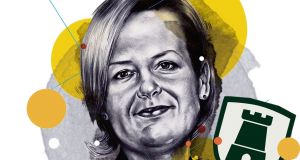 Deirdre Somers, chief executive of the Irish Stock Exchange (ISE), is the recipient of The Irish Times Business Person of the Month Award, in association with KPMG, for November.

Somers and her team moved after the Brexit vote last year to reassess the bourse’s long-prized independence and enter a deal at the end of November to be acquired by Euronext, the pan-European stock market operator spanning France, the Netherlands, Belgium, Portugal and the UK.

The €158.8 million transaction delivers a second major windfall in under four years for the company’s stockbroker-owners, Davy, Goodbody Stockbrokers, Investec, Cantor Fitzgerald and Campbell O’Connor. The shareholders shared a €27.5 million pot in 2014 under a group restructuring.

Ms Somers, with the ISE for more than two decades and chief executive for the past 10 years, has been instrumental in turning it from a peripheral cash equities exchange into the world’s leading hub for the listing of debt securities and funds.

Speaking at the announcement of the Euronext deal, Ms Somers said that it had “never been ideological” for the ISE to eschew industry-wide consolidation among bourses internationally in the past two decades.

“It was more strategic,” she said. “I never saw being bought was a particularly clever thing to do, unless it was for a very clear purpose.”

The opportunities from Brexit - including the prospect of luring London-based companies to take out a dual listing in Dublin, as well as building out the ISE’s key debt and fund listings business - were clear to the ISE following the UK referendum last year.

However, Somers acknowledged that the group a bigger brand behind it and “technology and innovation capabilities”. Euronext brings both. Under the deal, the ISE chief executive will also become head of Euronext’s debt, funds and exchange-traded funds (ETF) listings and a member of its managing board.