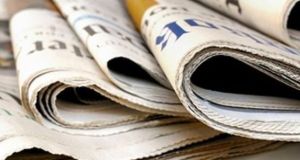 Newspaper publisher Johnston Press reported a 30.9 per cent fall in half-year adjusted pretax profit and said trading conditions for regional newspapers in the UK continue to be difficult.

Newspaper publisher Johnston Press reported a 30.9 per cent fall in half-year adjusted pretax profit and said trading conditions for regional newspapers in the UK continue to be difficult. However, the company said the monetisation of its digital audience continued to gain momentum, partly offsetting the decrease in print advertising revenues.

The newspaper industry has been hard hit in recent years as advertisers have followed readers to online platforms, forcing print publishers such as Trinity Mirror and Daily Mail and General Trust to cut costs drastically.

Trinity Mirror, which owns the Daily Mirror, on Monday ramped up its cost savings plan after weak print advertising and poor sales of classified ads pushed its half-year adjusted operating profit down 9.4 per cent.

Revenue from classifieds fell 28.8 per cent in the period. Digital audiences grew 15 per cent to a record high of 26.5 million unique users a month, the company said, while page views rose about 20 per cent to more than 110 million on average per month.

Johnston’s adjusted pretax profit fell to £6.7 million in the 26-week period from £9.7 million, a year earlier. The publisher of the Yorkshire Post, the Scotsman and several regional newspapers, said total revenue fell 3.1 per cent to £102.9 million. – (Reuters)