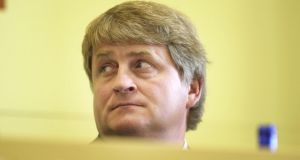 Billionaire Denis O’Brien made more than €22 million from the break-up of Blue Ocean Associates, according to The Sunday Times. Photograph: Frank Miller

According to the Post, these 24 companies and their subsidiaries will be able to make a profit of between 33 per cent and 50 per cent of their initial investment.

The Post also reports that the IDA will have to disclose the details of payments it makes to international companies to set up in Ireland, potentially paving the way for other countries to lure jobs away from the State.

Under European Union transparency laws, the agency will have to provide the names of companies that receive grants , how much the individual payments total and what they are for.

Figures show that Blue Ocean paid €28.2 million in dividends to an Isle of Man parent company last year after selling of all its assets. The parent company, Osmunda, is 67 per cent owned by Mr O’Brien.

The paper says that sources told it that bonuses at Davy, the country’s largest broker, were cut by 60 per cent or more in some departments. It is understood that some cuts were also suffered at rival broker Goodbody.

The paper reports that 47 per cent of workers surveyed living outside Dublin said they would need a pay rise of 30 per cent to move to the capital.