How 2017 will pan out for the media in Ireland

Budgets in newspapers, radio and TV are torn up as Facebook and Google strengthen 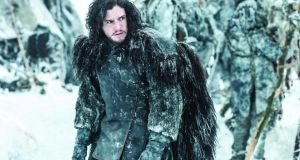 Entertainment empires such as Sky and Time Warner jewel HBO, which makes Game of Thrones starring Kit Harington, do very well out of the so-called golden age of television.

Here is one, and only one, grand prediction for how 2017 will pan out for the media industry: It will be like 2016, only more so.

That means it will be a little bit rocky, a little bit Brexity. Companies that don’t hail from California may find themselves the underdog in the battle for revenue with those that do. Issues of trust will affect every media company, including those, such as Facebook, that would prefer not to consider themselves media companies at all.

The themes that have dominated the media landscape of late – convergence, consolidation, digital transition – will be back again for another sequel. Mobile will attract an even greater chunk of advertising cash. Companies from the once separate sectors of telecoms and content production will merge, or at least sit down and do business with one another.

And Google and Facebook will consolidate their power, putting the squeeze on once-comfortable national media brands not blessed with anything like their scale.

In Ireland, the forecasts from various sources at the start of 2016 were for the print advertising market to be flat or down a fraction. Instead, it suffered double-digit declines. Radio revenues that were expected to increase 5 per cent, fell about 5 per cent, while the anticipated 7 per cent growth in television advertising turned out to be more like 3 per cent.

That sound you hear is budget spreadsheets in the offices of newspaper, radio and television offices being torn up and hastily revised downwards.

To some extent, the problem was Brexit-related. Caution crept in to the boardrooms of big household goods companies that decide their Irish marketing budgets out of London.

If digital advertising was affected by these same woes, however, it did a pretty good job of hiding it. Digital ad revenues galloped ahead. Industry body IAB Ireland and PricewaterhouseCoopers estimated they had grown 33 per cent for the first half of 2016, with mobile revenues edging ahead of desktop for the first time. (Digital as a whole overtook television as the single biggest category of advertising in Ireland in 2015.)

Every “legacy” media company has at least one foot in the digital camp, of course, and is looking at dipping the toes of their second foot in too. Shouldn’t they be profiting from this explosion in digital advertising revenues? In fact, the data suggested the key beneficiary was Facebook, while the paid search revenues that represent Google’s leading market share were no slouch either.

Both companies tightened their grip on the global advertising market. In the third quarter, Google’s revenues rose 18 per cent, while Facebook reported a 56 per cent surge – thanks to mobile – and that wasn’t even its best quarter of the year. Their performance in the Irish market mirrors these global growth rates, industry figures suggest.

Research firm eMarketer estimates that Facebook will have earned $26 billion (€24.8 billion) in advertising revenue in 2016, while Google is on track to capture about $53 billion. Little wonder then, with this immense power, both companies have come under greater pressure to acknowledge editorial responsibility for the content distributed by their algorithms.

But the fake news scandal is just the bluntest manifestation of what can happen when Google and Facebook are gamed purely for ad dollars – the lowest forms of media clickbait are, of course, a cousin of fake news. Both have the same tactics wrapped into their business model.

It is a truism of the internet age that money has been diverted away from content producers and into the pockets of the platforms and the distributors that make nothing. It certainly feels that way for news media, which is valiantly trying to recoup lost print circulation through online subscriptions. It’s the right way to go.

The television business is more complex. Entertainment empires such as Sky and Time Warner jewel HBO do very well out of the so-called golden age of television, and it is no coincidence that both Sky and Time Warner are the subject of takeover bids as the year ends. As the bubble in sports rights nears bursting point, glossy premium dramas such as HBO’s Game of Thrones and its successors may become even more important subscriber bait.

Every broadcaster’s bête noire is Netflix, a company with the polar opposite business model to Google and Facebook, and one that shows no sign of slowing down its hefty, striking investment in original content. In its bid to add subscribers to its advertising-free subscription service, Netflix spends $1 billion annually on marketing alone.

The average time people spend watching “traditional” television every day has not fallen – not in Ireland –- and yet it would be foolish to assume that the array of on-demand options spearheaded by Netflix won’t have an impact on viewer habits.

In 2016, there was evidence that Irish broadcasters were finding it harder to cut through to younger viewers – new shows on RTÉ 2 that would have been expected to garner 200,000 viewers if this were 2006, had to be satisfied with an audience closer to 100,000.

Some of this new reality may be connected to demographic trends, but still, the fear must be there – as it is for music radio stations – that audience (dis)loyalty is approaching a tipping point.

And, wait, what’s this? Facebook, which has about 1.2 billion active daily users, is reported to be “exploring” paying for its own original video content, commissioning it upfront from production companies, just like Netflix, just like Amazon Prime, and just like regular broadcasters. This one could really hurt.

Irish economy to contract by 12%, ESRI forecasts 06:39
ESRI warns of biggest slump ever, Brown Thomas’ plans and Michael O’Leary has a point 06:30
Irish banks’ failure to innovate could leave them written off for good 06:30
The ‘new normal’ in Dalata Hotels will include face masks 06:15
EU needs to rebuild GDPR after only two years 06:00
Search executive
jobs on irishtimes.com