No red card for mobiles or tablets during live television sport 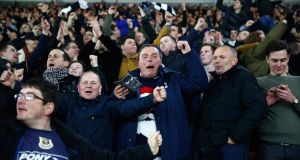 Spurs fans, some with one eye on their phones, celebrate during their away Premier League match against Southampton. Photograph: Julian Finney/Getty Images

As if the action on the pitch wasn’t somehow exciting enough, three-quarters of 25-34-year-old sports fans in Ireland dual-screen while watching sport on television, a new survey by PSG Sponsorship has found.

Some 54 per cent of sports watchers across all age groups are in the habit of checking social media or sports websites as they consume live sport at home, the agency said.

Facebook is the most common platform to check, the nationally representative survey of 1,000 people found, with 70 per cent of the dual-screeners consulting their timelines.

During 2016 digital media companies and traditional broadcasters from Maximum Media to the BBC made prodigious use of Facebook Live, its live video streaming function, to capture the attention of the sports audience.

A third of people physically at sporting events look at social media and sports websites as the action unfolds, according to PSG. This proportion has increased in recent years as wifi and mobile networks have developed, although PSG signalled that connectivity at sports venues would need to improve in order for the habit to spread further.

Dual screen consumption is less common among 45-54-year-olds and the 55-plus age group, with 47 per cent and 37 per cent of people in these age categories respectively turning to social media and sports websites in the middle of a sporting event.

“Social media teams, working on behalf of sponsors, rights holders and media outlets, are working overtime to produce branded imagery, gifs and stats to satisfy the appetite of those watching with a smartphone or iPad in hand,” said PSG Sponsorship account director Joanne O’Sullivan.

Rights holders like the GAA and rugby body IRFU have become “publishers in their own right”, she said, as they use social channels to build up and connect with their fanbase.

But not everybody has succumbed to sport on the “first” screen, never mind a second. Some 18 per cent of people surveyed by PSG said they did not watch sport on television at all.

Separate anecdotal evidence suggests that the high proportion of sports fans who take one eye off the television to consult their mobiles has not dented the numbers prepared to swear that the referee should really have given a penalty and that the first goal was definitely offside.