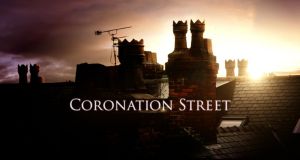 TV3 Group lost ‘Coronation Street’ when UTV Ireland launched. But following Virgin Media’s acquisition of UTV Ireland during 2016, the soap has returned to the TV3 schedule

Coronation Street became the most watched programme on TV3 in all of 2016 after the soap was moved back to the channel from UTV Ireland in December.

The 7.30pm episode of the soap on Monday, December 19th – in which Bethany prepared to seduce Gary and Norris made a heartfelt appeal – was watched by an average of 489,000 people, according to the consolidated television ratings from TAM Ireland/Nielsen.

This topped a list of TV3’s most-watched shows in a year otherwise dominated by football.

In what was a commercial blow for the company, TV3 Group lost Coronation Street and a number of other shows at the start of 2015 when UTV Ireland launched. But following TV3 owner Virgin Media’s acquisition of UTV Ireland during 2016, the soap has returned to the TV3 schedule.

TV3’s Euro 2016 matches filled out the top five. England’s match against Russia attracted 467,000 viewers, while Poland v Portugal, Wales v Belgium and France v Albania all exceeded 430,000 viewers, and another match from the tournament, Croatia v Portugal, secured 346,000 viewers and was ninth in its top 10 programmes for the year.

TV3 bid for exclusive rights to 21 matches in Euro 2016 and shared rights to the final in an auction held by rival RTÉ. The sub-licensing agreement, which did not include any matches featuring Ireland, came about because RTÉ decided it could not afford to keep the full Irish television rights that it had originally secured.

The sixth most-watched programme on TV3 during the year was its leaders’ debate in the general election, which had an average audience of 427,500 people back in February.

The debate was hosted by Pat Kenny and Colette Fitzpatrick, who have since reprised their partnership on TV3’s current affairs vehicle Pat Kenny Tonight, a new attempt by the channel to persuade the traditional RTÉ viewer to switch over.

The final results programme of the X Factor won an average of 362,000 viewers in December and was the seventh most-watched programme on TV3 during 2016.

The popularity of the X Factor is way down on its heyday in Ireland, mirroring the trend in Britain. In 2010, the final of the talent contest was watched by an average of 930,500 people on TV3, which was then the channel’s highest audience in its history – a record it held until it was beaten by its coverage of the Rugby World Cup in 2015.

Arsenal’s UEFA Champions League match against Barcelona on February 23rd was the eighth most-watched programme on TV3 this year, attracting almost 351,000 viewers, while an episode of Britain’s Got Talent from May 7th rounded out the top 10 with an audience of 339,000.

TV3 also released consolidated series figures for two home-produced programmes, Living With Lucy and Googlebox Ireland. The former, presented by Lucy Kennedy, won an average audience of almost 201,000 for an episode featuring Kerry Katona, while the latter, an Irish version of a UK format, had an average audience of 197,000 for its most-watched episode.

In a perhaps not surprising outcome, more people in the Republic watched Daniel and Majella’s Christmas Message on TV3 on Christmas Day than tuned in for Queen Elizabeth’s traditional message on BBC One. Some 78,000 people watched Daniel O’Donnell and his wife deliver their broadcast, while about 52,000 people viewed the queen.

Across all channels, the most-watched programme over the Christmas period in Ireland was Mrs Brown’s Boys on Christmas Day on RTÉ One, which was watched by 607,500 people, RTÉ said earlier this week.

The most popular programme for the year was once again the Late Late Toy Show, which was watched by an average of more than 1.4 million people.

Although TV3’s most-watched programmes have lower viewing figures than those achieved by its festival of rugby in 2015, the group is now on a sounder commercial footing following the return of Coronation Street and Emmerdale to its peak-time line-up.

The broadcaster, which is rebranding UTV Ireland as Be3 in the new year, will also lure typical RTÉ viewers to the channel from 2018 when it takes over the rights to the Six Nations rugby tournament.