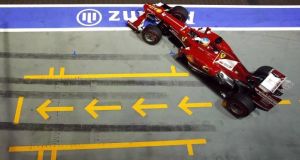 Liberty Media, the new owner of Formula One, plans to overhaul the elite motorsport, including selling race naming rights and staging ancillary events around its 21 Grand Prix with the aim of making each one “the equivalent of the Super Bowl”.

Liberty intends to turn each international Grand Prix into a week of events to engage spectators and attract new sponsors, according to a senior executive involved with Formula One.

It is also exploring expanding the contest’s US presence with the launch of new Grand Prix in big media markets. New York, Los Angeles, Las Vegas and Miami are under consideration.

The US media company wants to draw more fans to the sport around the world, lift television ratings and increase commercial revenues.

Liberty, which is controlled by Irish American businessman John Malone, acquired Formula One from CVC Capital Partners this year in a complex deal that valued the sport at $8 billion (€7.65 billion).

Bernie Ecclestone, the sport’s longtime chief executive, will take a revamped role although details have yet to be hammered out. He said in September that he would continue to be involved in the sport for “two to three years”.

Liberty plans to do more to promote the rivalries between teams and drivers, building a marketing department and new digital platforms. “There’s no marketing, no research, no data, no digital platforms,” the F1 executive said.

“This sport has unique global content and hasn’t done enough to take advantage of that. We need to build the rivalries and enable people to understand the technology that goes into the sport.”

Broadcasting revenues account for up to 35 per cent of F1’s annual revenues of more than $1.8 billion (€1.7 billion). Race promotion accounts for another third, 15 per cent comes from advertising and sponsorship, with the rest made up from hospitality, TV production, licensing and other sources.

After completing the purchase, Liberty believes Formula One has considerable potential, the executive said. “There’s probably no sport more associated with technology and yet we don’t have a technology sponsor.”

He added that there were untapped opportunities in merchandising as well as virtual reality, which would bring the F1 experience closer to fans.

Formula One has faced criticism for failing to modernise amid a long-term decline in its global audience. Changes this year to rules on race qualifying were derided by fans and media while sponsorship revenue is under pressure: the competing teams earned $750 million (€716 million) in 2015, down from $950 million (€908 million) three years before. Meanwhile, the switch from free to air to pay-TV has hit broadcast audiences in key markets, such as Asia.

Relations between teams and Mr Ecclestone have been fraught in the past over the distribution of prize money. Liberty intends to improve those relations, the executive said. “We need to have a shared vision.”

Liberty, which has stakes in SiriusXM and Live Nation Entertainment, also wants to beef up Formula One’s presence in western Europe – “it feels like it did 15 years ago,” he added – and then explore the launch of more US races in coming years. It operates a Grand Prix in Austin, Texas, but is keen to have races in larger media markets. “We want to create destination events, not just a race, that people feel they have to be at.”