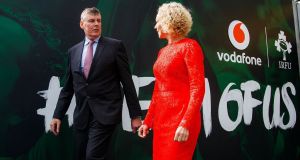 Vodafone has extended its sponsorship deal with the IRFU for another four years, in a deal believed to be worth €16 million.

The sponsorship extension out to 2024 will see Vodafone Ireland continue as the principal sponsor of the Irish rugby team and communications partner to the IRFU.

The agreement also sees Vodafone become official sponsor of the IRFU women’s interprovincial competition. The new deal will commence on July 1st, 2020 when the current one expires.

Vodafone said the investment would allow fans to experience “world class network services” on match days while its customers would also have access to exclusive content and instant match highlights for Ireland’s home matches on the MyVodafone app.

Vodafone Ireland chief executive Anne O’Leary said the company was “delighted” to extend its sponsorship agreement with the IRFU.

“We have a shared ambition with the IRFU to grow the game on the island of Ireland. We are very proud that our support of Irish rugby encompasses men’s rugby, women’s rugby and the game at all levels,” she said.

Philip Browne, IRFU chief executive, said: “Vodafone has helped to elevate our game and our team to new levels with clever and inspirational campaigns. Strong and committed partners, who understand our game and its values, are vital to the long-term investment we require to develop Irish rugby at every level.

“We are also very pleased that our partnership is delivering for Vodafone and its customers, and we are excited to work with Anne, and all her team, in the months and years ahead.”

Vodafone, Ireland’s largest mobile phone operator, signed its original four-year sponsorship deal with the IRFU in mid 2016. It was reported at the time as being worth €15 million.

The new sponsorship deal is a boost to the IRFU on the eve of the Rugby World Cup in Japan, where Ireland will hope to get past the quarter final stage for the first time in the history of the tournament.

“I would like to take this opportunity to wish the team, management and backroom staff every success ahead of their departure to Japan,” Ms O’Leary said.

Since signing up as sponsor of the IRFU, the Irish men’s rugby team has won a Grand Slam and beaten New Zealand for the first time.

1 Knock gets visit from world’s largest passenger plane
2 High time: Netherlands moves to clean up absurd cannabis policy
3 Appeals board grants planning for 354 Greystones homes
4 How do you know if you are wealthy? It’s not straightforward
5 Store manager unfairly dismissed for hugging staff members awarded €15,000
6 Nothing beats practice in bid to master public speaking
7 How to . . . keep your kids safe playing Fortnite
8 Just 8,000 houses built last year offered for sale on open market, says CIF
9 Beau Lotto: How to rewire our brains to spark innovation
10 Are you a good investor – or a lucky one?
Real news has value SUBSCRIBE