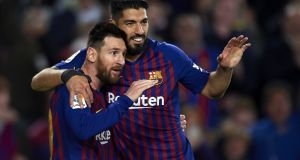 Premier Sports, the pay TV broadcaster founded by Irish businessman Mickey O’Rourke, has secured the UK and Ireland rights to show every match from Spain’s La Liga over the next three years.

This gives it exclusive rights to broadcast the Barcelona-Real Madrid games, one of the biggest derby games in Europe.

The rights were previously held by Eleven Sport in the UK but the streaming service ran into financial difficulties and the rights have now moved.

La Liga has become the first football league to have a dedicated television channel in the UK and Ireland carrying all live games. It Ireland, the matches will be made available by Premier Sports as part of its channel bundle on Sky TV, and via its own streaming service.

Fans will have the option to add LaLigaTV as a standalone service via Premier Sports, priced at £5.99 (€6.71 )per month or £49 per year, once the channel is officially launched in the coming weeks.

Additionally, from next week the free-to-air channel FreeSports will broadcast select match content as well as a weekly La Liga highlights show.

Premier’s commercial venue customers will also be able to show La Liga via their Sky TV box or through Premier’s soon-to-be-launched streaming solution.

Commenting on the rights deal, Javier Tebas, La Liga President said: “Through our long-term partnership with Premier Sports, we’re happy to give fans of Spanish football a chance to enjoy La Liga’s world-class content in a variety of formats... as well as our own dedicated English-language channel, LaLigaTV. We trust that football fans across both these territories will enjoy unprecedented access to the best league in the world.”

Founded in 2009, Premier Sports 2009 and operates three sports channels in the UK - one of them under the FreeSports brand. It also holds rights to the Guinness PRO14 rugby, the Serie A soccer league in Italy, Scottish cup football, along with GAA matches and NASCAR in the UK.