TV3 will rebrand to Virgin and add sports channel this autumn 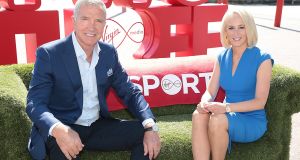 TV3 Group’s three television channels will be renamed from the end of August, while the company, to be known as Virgin Media Television, will launch a new sports channel in September for Virgin Media customers only.

The move follows investment in TV3 Group by Virgin Media Ireland, which acquired the broadcaster in 2015, particularly in sports rights, where it has outbid RTÉ for flagship events such as the Six Nations and the UEFA Champions League.

Virgin Media Ireland chief executive Tony Hanway originally flagged the move to The Irish Times last November, but a plan to go ahead with the rebranding of the channels in April was deferred. It will take place shortly before the 20th anniversary of TV3 on September 20th, which will be marked by an evening of special programming.

At an event in Dublin’s Bord Gáis Energy Theatre designed to showcase the group’s upcoming shows, which include the return of Ireland’s Got Talent and Gogglebox Ireland, the addition of a news bulletin at 8pm and a new six-part drama, Blood, starring Adrian Dunbar and written by Sophie Petzal, which is currently filming in Kildare and Meath.

TV3’s trademark purple branding was absent from the event, which Mr Kiely said was “literally a red letter day for TV3, as we begin the countdown to Virgin Media Television”.

The broadcaster showed a reel of TV3 programming from the past 20 years, from the first news bulletin presented by Gráinne Seoige and Alan Cantwell through the Tallafornia and Vincent Browne years to footage of Ireland’s Grand Slam triumph in the Six Nations last March.

But Mr Kiely said the day was “really about looking forward” with a rebrand that will “help us all reassess TV3 as a broadcaster of scale”.

Having suffered many lows throughout the recession, the group was on something of a high, growing its audience this year. “A curious time to rebrand, one may suggest,” he said, but the group’s ability to compete internationally would be “better served” under the Virgin name.

Virgin Media One (TV3) will be the main channel, while Two (3e) will be “the flipside” of One. On Virgin Media Three, “we will have some fun”, he said. The 3player will also change its name, becoming the Virgin Media Player.

“Now is the perfect time to bring TV3 fully into the Virgin Media brand and identity,” Mr Hanway said.

Virgin Media Ireland will use the new sports channel, which it said would be “home to top class European football and the latest sports news”, in its push to add new broadband and television subscribers.

Virgin has neither confirmed nor denied that it will show Wednesday night fixtures involving English teams followed by people in Ireland on Virgin Media One, which would mean they could be watched by customers of other television platforms.

TV3 / Virgin Media Television has rights to show nine live Heineken Champions Cup rugby games, and it said this tournament would be free-to-air for the first time since 2006. It also has rights to UEFA Euro 2020 qualifiers (not involving Ireland) and fixtures from the inaugural UEFA Nations League that begins in September.

New drama Blood may serve as an example of the broadcaster’s ambition in the Virgin era. The psychological thriller, with a cast led by Bafta-nominated Dunbar and newcomer Carolina Main, has been made by Company Pictures and Element Pictures in association with Virgin Media Television and All3Media International, a UK “super-indie” producer that is 50 per cent owned by Virgin’s parent Liberty Global.

All3Medial International are “in discussion” with a number of international broadcasters about distribution deals for the drama, which is directed by Lisa Mulcahy and Hannah Quinn, and co-produced by Ingrid Goodwin.

“It’s got a spooky quality to it,” Dunbar said. “It’s a great departure for TV3. It’s really interesting that they have their eye on selling it into the international marketplace. I think it’s good to have another player in the Irish market.”