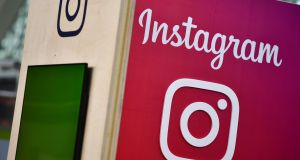 Instagram logo on display: The Facebook-owned social media brand has launched ‘IGTV’ for video content of up to one hour. Photograph: Alexander Koerner/Getty Images

Even the charge that is most commonly levelled against it – that its filter-loving celebrity users promote unrealistic body images and unscientific, unhealthy diets – has yet to fully stick. It continues to bathe in its own sunlight.

Co-founder Kevin Systrom, who has continued to run the platform since selling it to Facebook in 2012 for $1 billion (a dollar for every user it now has), last week announced the launch of a new feature: Instagram television.

Instagram has been doing video for five years, but it was strictly short-form. Now, thanks to its new IGTV function, anyone with the time, data allowance and inclination, can upload videos of up to one hour as opposed to one minute long.

One billion users is not enough

The IGTV section on Instagram will feature content from people whom users already follow. But the company has also introduced a separate IGTV app where videos start playing automatically in full-screen and vertical (rather than landscape) mode. The things you will see just by testing out this app for a few seconds... well, let’s just say a lot of people are working out and want you to know it.

The reason Instagram wants to be more like Google-owned YouTube boils down to this: one billion users is not enough. In order to spur future growth, and satisfy shareholders in its parent Facebook, it must do something new. The fact that it has chosen long-form video as its weapon of choice is not an accident, but a strategy born of real cultural shifts.

“People are watching less TV and more digital video,” Instagram said, citing eMarketer’s identification of a tipping point among US viewers. “By 2021, mobile video will account for 78 per cent of total mobile data traffic,” it quoted a global Cisco forecast.

Instagram, of course, did not lead this migration to the social media mélange, but it believes it is in a prime position to capitalise from it

Its final justification was the generational change factor, courtesy of a Boston Consulting Group study on the future of television: “And we’ve learned that younger audiences are spending more time with amateur content creators and less time with professionals.”

What a world. Instagram, of course, did not lead this migration to the social media mélange, but it believes it is in a prime position to capitalise from it.

IGTV is not completely unlike what rival Snap has done with the Discover feed of its app Snapchat. In last year’s redesign, it separated friends’ content from that of publishers and randomers. Instagram, however, has the advantage of learning from the user upset caused by this attempt to divide the “social” from the “media”.

And it has been here before. In 2016, it launched Instagram Stories, a tool for ephemeral content that disappears in 24 hours. Within a year, its daily usage had overtaken that of Snapchat Stories, the feature that inspired it.

Its video push also comes at a time when parent Facebook has been trying to build up Facebook Watch, an original video tab for US users. With Facebook said to have allocated a budget of $1 billion for original content, including news programmes, to get it going, this is a professional style of land-grab.

Eventually, Facebook plans to expand Watch to individual creators – the YouTubers – and offer them the same kind of advertising revenue-sharing partnerships that they currently have on YouTube.

The difference with Instagram’s IGTV is that it won’t immediately pay for any content on the app and it won’t operate a YouTube-style split on the ad revenue. This suggests IGTV will be most attractive not to the so-called amateurs (or publishers in need of revenue) but the big brands with celebrities and influencers on the books. For them, all that matters is that their message is being consumed and there is a knock-on effect on sales. If Instagram delivers the numbers, Instagram is where they will go.

Instagram clearly isn’t worried. Indeed, the platform is so confident about its popularity right now that it is testing various time-well-spent tools that the most dedicated Instagrammers can use to manage their “Overgramming”.

You know you’re doing something right when the phenomenon of being used “too much” has its own terminology.