Maximum Media puts the spotlight on ‘Her’ 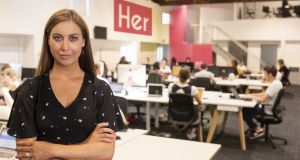 Maximum Media has promoted Her and HerFamily editor Gillian Fitzpatrick to the role of publisher as part of plans to boost the visibility of the female-focused brand.

Maximum, the company behind the JOE and Sports JOE sites, said it wanted to build on the commercial success of Her, which reached 2.6 million unique users in the past month. It is appointing Ms Fitzpatrick to “an old-school publisher role”, unusual in the Irish market, to oversee its revenue growth.

The “Her” brand, which marked its sixth birthday this week, was established by Maximum founder Niall McGarry two years after the original JOE site and it has been overshadowed to some extent by its older brother.

“We probably haven’t done enough to promote Her as a standalone entity,” Mr McGarry said. “Her is going to be shouting a lot more.”

A sales team dedicated to Her and its offshoot HerFamily will now sit alongside Ms Fitzpatrick in “a separate business unit” at Maximum’s Dublin offices in Fumbally Lane, he said. Some 20 people – writers, videographers and social media journalists – work on its editorial content.

Ms Fitzpatrick, who began her career in 2007 as a newspaper journalist, said the role of publisher, which combines editorial and commercial responsibility, reflected how the modern newsroom was changing.

Her’s pitch is to blend its predominantly light-touch celebrity, fashion, beauty and other lifestyle content aimed at younger women with issues such as reproductive rights, the gender pay gap and low levels of female political representation.

Meghan Markle is proving a popular figure with its audience, while there is also “huge appetite” at the moment for wedding-related content, Ms Fitzpatrick said.

“We can see the things that are absolutely flying now. In three months’ time, that might not be the case, but we can very quickly change tack.”

Publishers focused on the female audience are “used to reinventing”, she added. More Her-branded events, in partnership with its commercial clients, are in the pipeline.

The fast-growing Maximum Media employs 100 people at its Dublin office, along with 60 in London and Manchester, and intends to add staff in a Galway office. The company makes most of its revenues from branded content.

Mr McGarry said Maximum “had our ups and our dips in our audience for Her” and that the brand has had to compete with influencers in a way that JOE does not.