Discussion about cyclists on RTÉ constituted ‘hate speech’, according to one complainant

The Dublin Cycling Campaign have made an official complaint to the BAI over a segment on The Late Late Show, in which panelists were invited to put something they dislike "in the bin" - TV host Maura Derrane chose "arrogant cyclists". Video: RTÉ 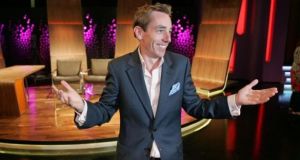 The Broadcasting Authority of Ireland (BAI) has rejected seven complaints regarding a segment on RTÉ’s Late Late Show about “binning cyclists”.

The segment, which was aired on January 12th last, featured TV presenter Maura Derrane, author Eoin Colfer and social media influencer James Kavanagh in which they were invited to state what things they would “bin” for the New Year. Ms Derrane nominated cyclists stating that it bothered her when three or four cyclists travel abreast on a country road.

“I like cycling but one thing that really bothers me is three or four cyclists abreast on a country road, where there’s no need. Because I mean are you in competition with a car? You’re never going to be faster, and it’s almost to piss people off that they do it. I know that,” she said.

Mr Kavanagh suggested cyclists who travel in groups are “like farm animals”.

One complainant said the programme promoted mistaken myths against cyclists and presenter Ryan Tubridy encouraged and magnified this “hate speech” aimed at “dehumanising people who cycle”.

The complainant said the segment was offensive to people who cycle and would promote violence and aggression against cyclists.

A separate compliant made by Dr Paul Corcoran of the Dublin Cycling Campaign said elements of the programme could be seen as inciting prejudice or hatred towards people who cycle.

RTÉ said it was a comedic and light-hearted segment and the main editorial goal was to amuse the audience, partly through comic exaggeration. The broadcaster said it was not a serious discussion on road use or traffic safety nor was it meant to reflect a position of RTÉ or the show on the issue of cycling safety in general.

The BAI rejected the complaints, noting that the tone of the segment was humorous and light-hearted, with a focus on cyclists who demonstrate particular behaviours. It said its members did not believe the discussion could be reasonably considered as supporting discrimination or inciting hatred towards cyclists.

The BAI rejected 24 complaints in its latest round of decisions, which were published on Wednesday. Two complaints were made about the Pat Kenny show on Newstalk, for segments on the referendum on the Eighth Amendment aired last October and November.

In an interview with Dr Peter Boylan, former master of the National Maternity Hospital on October 19th, the complainant said Mr Kenny’s interviewing was facilitatory and supportive rather than questioning and challenging.

The complainant said this was demonstrated in the lack of challenge to Dr Boylan’s use of the phrase “anti-choice” and the use of the term “safe” in relation to abortion.

The BAI rejected the complaint, stating that the language and phrases used and the interviewee’s treatment by Mr Kenny did not infringe on the requirements for fairness, objectivity and impartiality.

A complaint regarding an interview with Katie Ascough, former president of UCD’s student union on RTÉ’s Marian Finucane show was also rejected.

The complainant said at times Ms Ascough presented misleading information and was not sufficiently challenged on these by the presenter. The BAI said it was a human interest story about Ms Ascough’s personal experience, upbringing and impeachment.

It was not a current affairs report or debate on abortion or the Eighth Amendment, it said.