Time has come to appoint a minister for media

A single minister for culture, media and digital sectors would be logical and helpful 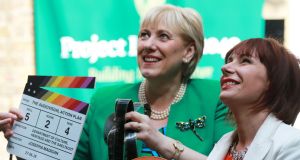 Large ensemble cast: Minister for Business, Enterprise and Innovation Heather Humphreys and Minister for Culture, Heritage and the Gaeltacht Josepha Madigan at the launch of the Audiovisual Action Plan in June. Photograph: Nick Bradshaw

There’s a tradition in Britain that whenever a politician inherits the culture portfolio, any past utterance they have ever made about their cultural preferences will be dragged up to get a measure of their qualifications.

So the last bloke liked Ed Sheeran and the woman before him was a crime fiction fan. What did it all mean? For the newest occupant of the role, Jeremy Wright, the charge was a little different in substance: he hadn’t tweeted since 2015.

This was relevant because the UK’s culture department goes by the full title of the Department of Digital, Culture, Media and Sport. Even before “digital” was added to its name last summer, it had added telecommunications, data protection and digital media to its “core” brief covering the vast swathe of the creative industries.

Here, there is no minister or department for media, never mind one that is sensibly allied to the highly related worlds of culture and technology. Newsbrands Ireland has called for one to be introduced, most recently in the wake of Leo Varadkar’s expression of sympathy with Donald Trump’s media hostility.

The representative group for print and online news publishers believes that there should be one member of the Cabinet with full oversight of all elements of the media. It is not alone in doing so.

Ireland’s largest marketing communications group, Core, has also espoused a widening of the minister for communications remit to include all media, describing it as “a first step” to tackling the threat to indigenous companies posed by unregulated global technology giants.

Beyond the power to approve, reject or insist that conditions be attached to mergers in the newspaper sector, the Minister for Communications doesn’t have much to do with it

The media responsibilities of the Department of Communications, Climate Action and Environment have historically been confined to broadcasting, with the Minister for Communications serving as the quasi-minister for RTÉ.

The department now cautiously includes “certain media” in its description of its purview, with the big change coming in 2014 when it took on responsibility for media mergers. Beyond the power to approve, reject or insist that conditions be attached to mergers in the newspaper sector, however, the Minister for Communications doesn’t have much to do with it.

Broadband, an issue of whopping great importance to most of the media, also lies with the Department of Communications and this part of the portfolio involves many of the same companies that have irons in the broadcasting fire.

So far, so converged. The department now also “forms policy on new media”, which in practice has meant initiatives on digital skills and online safety.

Intriguingly, the Broadcasting Authority of Ireland (BAI), which falls under the corporate governance responsibility of the Department of Communications, may eventually acquire an EU watchdog role for YouTube, with European law obliging a highly-significant extension of the BAI’s bailiwick beyond traditional broadcasting.

Meanwhile, when Facebook’s Cambridge Analytica apology tour stopped off in Dublin, it was the Oireachtas communications committee that had the honour. But it is the Department of Business, Enterprise and Innovation that has responsibility for the very Facebook-y topic of data protection (the issue being one of the many responsibilities of Minister of State Pat Breen), as well as copyright, the scene of an ongoing battle between content creators and content platforms such as YouTube.

There will never be a perfect carve-up, of course, and the media is hardly the only industry to be obliged to knock on several department doors before they find the right one for the occasion. Denis Naughten (communications) and Heather Humphreys (business, but previously culture) are well capable of standing next to each other at a press call.

But some departmental remit splits just seem odd. The future of RTÉ is inextricably linked to the Government’s policy on funding audiovisual content. The latter incorporates the former. And yet the department with responsibility for RTÉ was not the one that last month launched a “€200 million Audiovisual Action Plan”. That was the Department of Culture, Heritage and the Gaeltacht, led by current Minister for Culture (and author of Negligent Behaviour) Josepha Madigan.

Uniting the creative industries within one department bears an obvious logic, which is why it will probably never happen

The plan, which bore an image of Saoirse Ronan and Domhnall Gleeson from Canadian-Irish-British co-production Brooklyn, promised a €200 million investment spread over 10 years, which would represent a restoration of the pre-recession budget of Screen Ireland (the new name for the Irish Film Board). Hurrah.

Uniting the creative industries within one department bears an obvious logic, which is why it will probably never happen. That connection between communications and climate action is just too strong to break, I guess.

But every miserable thing that has happened lately, from the Facebook scandal to Varadkar’s whinge to press freedom crises around the world, supports the fact that the media, and the State’s attitude to it, is kind of important. To everyone. A single Minister for Media would go some way to reflect that.