Ikea wins at advertising with ‘win at sleeping’ campaign 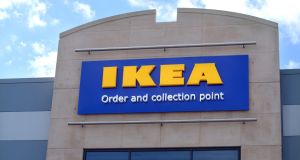 Ikea Ireland is doing well, collecting revenue of €132 million in the year to August 2015, up 17 per cent on the previous 12 months. Photograph: Cyril Byrne

In these troubled yet “always on” times, we are forever only one tweet, one email, one headline, one heartbreak, one surprise direct debit away from insomnia.

Utterly tedious and despair-inducing as it unfolds, insomnia goes on to sap the joy out of our waking hours for good measure. If only there was some brand, multinational and ubiquitous, that could help to banish this curse and make going to bed the joy and the triumph that it should be.

(Note: It’s a maximum of 15 items through the express checkouts.)

Ikea’s new campaign, the product of London creative agency Mother, is indeed wonderful. There are few more Zeitgeisty topics than the importance of a good night’s sleep to our base levels of happiness. The subject is like a fluffy, high-pile rug onto which Ikea’s phenomenally successful global brand has jumped with both feet.

Po-faced lifestyle media outlets are still only waking up to the clickbait potential of “sleep hygiene”, the clinical-sounding label given to the practice of creating the best external environment in which to nod off and stay nodded off.

Huffington Post founder Arianna Huffington, to be fair, favours the term “sleep revolution” and with the zeal of a post-collapse convert firmly links a sleep deprivation “crisis” to a culture of overwork. Awkwardly, sleep hygiene “top tips” often seem to be about depriving ourselves of things we need to get us through the next turn of the vicious cycle: that afternoon coffee, that phone on the bedside table.

There are no such feel-bad messages from Ikea. It wants us humans to “Win at Sleeping”. In its new television epic, the act of putting your head down on a pillow is portrayed as a victory of gladiatorial proportions.

The new ad is clever for another reason, too. It is no whimsical flash in the pan. Instead, it very smartly furthers the brand-building work of ads such as 2015’s the Joy of Storage, which was the one where Ikea posited a vision of such perfect life harmony, a fortnight’s supply of pristine T-shirts magically lined up on the rail of a wardrobe, ready to wear.

Ikea presents the universe as an ordered place: fun, but still logical, neat and calm when calmness is needed. The idea its advertising sells is that Ikea is so essential to the optimum operation of our lives, it’s best to head straight to one of its warehouse-like stores immediately.

Here are the numbers behind the regular, cinnamon-fuelled weekend frenzies at Ikea’s Ballymun store: Ikea Ireland collected revenues of €132 million in the year to August 2015, up 17 per cent on the previous 12 months. It made a pre-tax profit of more than €13 million in that period, up from €7 million. So that one store makes a profit of more than €1 million per month. It’s dream-like.

The Swedish giant’s “win at sleeping” campaign popped into my mind last week during a compelling early-morning presentation in Dublin by marketing expert Peter Field. To an audience of more than 300 industry professionals, Field decried an obsession with short-term results as “the most dangerous and corrosive trend in marketing”.

Short term was defined as any campaign designed to produce results in less than six months. Measuring the effectiveness of a campaign within this kind of time scale inevitably pushes brands too far down the “buy now” promotions route, preventing them from recognising the value of strong, built-to-last creative advertising.

The example Field gave of a brand that hadn’t sold creativity short was John Lewis, the department store chain that has swollen its market share in the UK on the back of its commitment to television advertising. The John Lewis Christmas ads are not an annual “event” in the media merely because they make some viewers cry. They really are integral to the business of John Lewis and they “power the brand for the rest of the year”.

But there is a feedback loop at play. To have a campaign picked up by news media is a coup for advertisers, and John Lewis and its creative agency Adam & Eve / DBB can now rely upon this happening each time. Awareness, as Field said, underwhelms as an ambition for mature brands. What they need to become the automatic consumer choice in their category is “fame”.

They may not be treated as news stories, but Ikea’s quirky, topical campaigns do pick up column inches – happy to oblige – because its creative game is so good. In a time of great consumer anxiety, its investment in advertising will continue to pay off. Now excuse me as I press play on my latest nightmare.