Newspapers need to cut their links with coffee 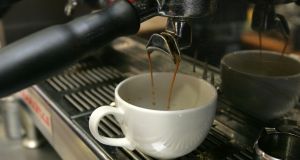 In 2006 Simon Kelner said it was about time newspapers started to catch up with the price of a cup of coffee. Photograph: Frank Miller

Remember Euro 2016? Those were good times for buyers of the Irish Sun, who could enjoy their daily page-turn for 50 cent as owners News Corp dabbled with a half-price promotion. If the cost of newspapers absolutely must be compared to the cost of coffee, then this was barely a sixth of a cup.

Audit Bureau of Circulations (ABC) figures released last week confirm that the Irish Sun managed to grow its circulation in the second half of 2016 by 1.2 per cent year-on-year to 59,183, while an earlier set of figures showed that it recorded a 4.6 per cent rise in the first half.

The title also experimented with bulks – the practice of selling discounted multiple copies to suppliers who give them away for free – but a spike in its June and July sales suggests it was the price promotion that did the trick.

The Irish Sun’s circulation was 11,158 copies higher in June 2016 than it was in the previous, football-less June, and the boost dissipated soon after the final whistle.

In recent years, price promotions have not been a common feature of the Irish print market where, for a variety of factors from newsprint costs to broader inflation to the shifting economics of the newspaper business, cover prices have been on their way up.

Not too long ago, it was fashionable to forecast that the cost of a daily newspaper would eventually hit €5, and that printed news would resemble a luxury, “legacy” format favoured only by the dedicated or stubborn few – an inky newspaper would become the journalistic equivalent of record shop vinyl.

The rate of decline in print circulation may have accelerated again, but that vision still seems some way off. Nevertheless, it is worth noting that two UK-published newspapers now retail in Ireland for €3.80 – the Financial Times on a Saturday and the Observer on a Sunday – at a time when the content in both products is available at a cheaper rate to digital subscribers – and in the Observer’s case can be read online for free.

Although upward nudges in cover prices have been more a symptom than a cause of declining print sales, the price incentives for readers are clearly weighted in the direction of digital (except on VAT, but that’s a whole other column).

The relative cost of a single physical newspaper is a topic that stays at the fringes of industry conversation for a good reason: the story of downward price pressure is simply the much bigger narrative. In the era of free online news, it hasn’t been easy for news organisations to sign up hordes or even trickles of subscribers to digital products, whatever the price. Audited evidence that more people are doing so in Ireland is encouraging.

Compared to the free internet, everything costs money. But compared to the cost of buying a newspaper, digital subscriptions are cheap. If digital subscriber bases can continue to expand, two questions that then arise are whether prices are set high enough to sustain the production of journalism and whether it is even possible to increase prices without triggering a counter-productive rise in the rate of subscriber churn.

I have one fervent wish and that’s for the industry to call time on the practice of comparing the price of their products – print or digital – to the price of coffee. The Guardian is the one currently pushing this, imploring readers to support it “for less than the price of a coffee a week”, but it is by no means the only one to have linked the two.

I would love to know what kind of consumer psychology research suggests it is an effective strategy. Rather than wooing potential readers, it seems to query their purchasing priorities, while also assuming that they buy coffee unthinkingly and don’t regard it as an expensive habit they should give up tomorrow.

In 2006, before the decline in print circulation properly took hold, then editor-of-chief of the London Independent Simon Kelner resurrected a historic case for coffee-newspaper parity, asserting that it was about time that print newspapers started catching up with the price of a cup.

But today, the comparison is used in a much more apologetic way, and perhaps that it is the real problem. It sounds defensive, while saying nothing about the quality or nature of the product. Does Netflix say “subscribe to us for the price of a couple of pints” in its marketing? No, it does not.

There is also something sentimental about the comparison. It conjures up the image of loyal broadsheet readers with 45 minutes a day in which to sit back and savour their chosen newspaper with a mug and a scone.

It forgets that digital media consumers of today typically scroll through multiple feeds for five minutes until the train comes or it’s time to flush. Recruiting this group will take more than envious glances at the sum Starbucks can levy for a cappuccino, and it may take more than loss-leader price promotions too.

7 Investors eye purchase of €78m worth of Dublin logistics assets