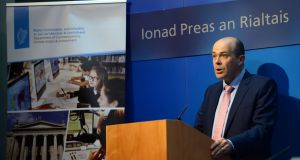 Minister for Communications Denis Naughten: “For a community radio station, €750 is a lot of money.” Photograph: Dara Mac Donaill

Broadcasters will pay a lower levy for their regulation under proposals due to be brought to Cabinet in the next few weeks by Minister for Communications Denis Naughten, in a move designed to alleviate financial pressure on the Irish sector.

The Minister said he was “in negotiations” with his Government colleagues about amendments to the broadcasting legislation, one of which will include cutting the sums paid by the industry for the operation of the Broadcasting Authority of Ireland. Mr Naughten said he wanted to “reduce the burden” on broadcasters feeling financial pressures as a result of lower advertising revenues. “We need to see more flexibility in relation to that levy.”

Mr Naughten said he hoped to make several amendments to the Broadcasting Act and have the legislation updated by the end of 2017 “at the latest”. The changes would benefit both public service and commercial broadcasters, he indicated. Community broadcasters will now be exempt from paying the levy, in a move that is worth about €750 a year to a community radio station.

The Independent Broadcasters of Ireland (IBI) group, which represents independent commercial radio stations, has long campaigned for both cuts and reform of the broadcasting levy.

“We feel we are making progress. We have been very frustrated over the years with the lack of progress,” IBI chairman John Purcell said. He later added that reducing the levy was just one of a series of measures needed to foster Irish broadcasters.

The levy will also be “future-proofed” so that any European-focused television companies currently based in the UK that choose to relocate in Ireland as a result of Brexit will be liable to pay it.

At the moment, it is possible for television channels from outside the State to operate here under what is known as the Section 71 licence. They do not have to pay the levy.

Regulated broadcasters pay between €30,000 and €200,000 a year under the levy, and the independent sector has long argued it is unfairly applied.

Mr Naughten also signalled that new bursaries for young journalists working “at local level” will be introduced. These will be paid for out of the BAI’s Broadcasting Fund, to which 7 per cent of the television licence fee receipts are allocated. The fund currently supports the Sound and Vision scheme, which awards money for programme-making to independent producers, as well as a media archiving scheme.