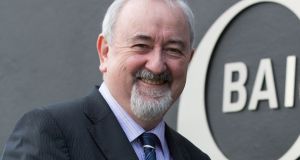 Broadcasting Authority of Ireland chairman Prof Pauric Travers: “We are looking at how we maximise the progress we make in gender and diversity,” he said

Broadcasters will be asked to report on the gender balance and diversity of their presenters and contributors to the Broadcasting Authority of Ireland (BAI), after the regulator signalled that it intends to be “more active” in this area.

The authority is also examining how content funding awarded under its Sound and Vision scheme can be “more equitably distributed” between male and female creative talent.

“We are looking at how we maximise the progress we make in gender and diversity,” said BAI chairman Pauric Travers, speaking ahead of the launch today of the regulator’s three-year strategy. “We want to build that into how broadcasters report to us.”

Prof Travers said the BAI would pay special attention to gender balance, diversity and supports for Irish language content in next year’s planned review of Sound and Vision. Applicant companies seeking funds under the scheme, which awards a portion of licence fee money to independent production companies, may be asked about the gender balance and diversity of the lead teams behind the proposed project.

The report by Kathy Walsh, Jane Suiter and Orla O’Connor suggested the BAI should set a minimum quota of 30 per cent for female representation among guest and expert contributors to current affairs radio and encourage broadcasters to work towards a 40:60 ratio.

Women on Air and Women in Film and Television were among the organisations to be awarded learning and development grants from the BAI this year.

“Sectoral sustainability” has also been placed at the heart of the regulator’s strategy for the first time, after radio broadcasters told the BAI there was an “existential threat” to their businesses, prompted by the growing share of Google and Facebook in the advertising market.

Prof Travers said there was no “silver bullet” that would solve funding challenges faced by media companies.

The BAI chairman said a more efficient collection of the television licence fee was “badly needed” but that he had “no doubt that there is still room for efficiencies” at public service broadcasters RTÉ and TG4.

The authority is planning to re-examine its media ownership and control policy, which has been in place since 2012. This is separate from its role in the review of Independent News & Media’s proposed purchase of local newspaper group Celtic Media.

A BAI advisory panel on the Celtic Media deal is due to report to Minister for Communications Denis Naughten on its view of the acquisition on May 11th, with a decision by the Minister expected in June. The regulator has appointed the UK-based media consultants Communications Chambers to act as its advisers.