RTÉ risks being bypassed as business of TV drama realigns 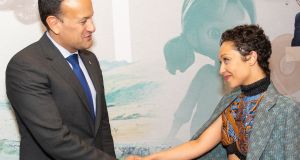 In one of his less pressured engagements of late, Taoiseach Leo Varadkar recently found himself in Los Angeles watching preview clips of the television series, Normal People.

Made by Irish production company Element Pictures, adapted from the novel by Mayo writer Sally Rooney, directed in part by Dubliner Lenny Abrahamson and mostly filmed in Ireland, it’s as Irish as they come. But as the Taoiseach may have been told as he was treated to an early glimpse, Normal People is also unusual for an Irish TV drama – for now, at least.

The 12-part, half-hour series is supported by a new fund at Screen Ireland dedicated to TV drama production. Its existence has nothing to do with RTÉ, or for that matter, Virgin Media Television or TG4.

Instead, it has been commissioned from Element Pictures by the online-only and UK-only BBC Three strand of the BBC “in partnership” not with an Irish broadcaster, but with a US one: the Disney-controlled platform, Hulu.

Normal People received €600,000 in production funding through Screen Ireland, which in 2018 changed its name from the Irish Film Board to pursue a more visible role in the globally-thriving business of TV drama.

How will viewers in the Republic be able to watch it when it comes to air in 2020? The BBC has said it will show it on BBC One (possibly after UK viewers have been able to access it all at once online). And most likely it will also be sold to an Irish broadcaster.

It’s hard to see why an Irish broadcaster wouldn’t want it: the novel was a bestseller, the setting is both urban and rural and the series stands a good chance of chiming with a younger audience.

Of course, Varadkar wasn’t only in California to break out the popcorn for a Normal People teaser. He was leading a two-day trade mission that saw him open an Irish consulate in Los Angeles and meet with senior executives from Disney, Netflix, Warner Bros and Fox Searchlight, among others. It’s hard to get more senior in this business than two of his appointments, Disney chief executive Bob Iger and Netflix boss and co-founder Reed Hastings.

At a gathering at a Beverly Hills hotel at which he announced that Screen Ireland would be re-establishing an office in LA, the Taoiseach duly talked about how the Government intended to help the agency “double the size” of the Irish television, drama and animation industry – to which the most common responses must have been “woo-hoo” and “yes, but show us the money”.

Screen Ireland has asked for its capital budget to be lifted to the pre-recession figure of €20 million – it is €16.2 million for this year. If it gets even half of what it wants, it is likely to use much of the funds to beef up its activity in television drama. Notwithstanding their respective outcomes in Budget 2020, the Government finds it easier to be publicly friendlier and upbeat about the agency than it does about RTÉ.

The public service broadcaster, which used to be the beginning and end of Irish television drama, is now in danger of becoming borderline peripheral. Apart from the three-part mini-series Resistance back in January, its big post-watershed drama this year is Dublin Murders, which starts on RTÉ One with an awkwardly scheduled double-bill on Wednesday, October 16th. RTÉ is a co-production partner on this series, and there is Irish talent involved throughout.

But the eight-parter began its screen life as a BBC project and it is BBC One that will have the honour of airing it first next Monday and Tuesday.

This comes in a year when Channel 4 has shown no fewer than three scripted series with an Irish theme and/or setting – The Virtues, and comedies Derry Girls and Aisling Bea’s This Way Up, all excellent – while the other Irish comedy success story of recent times, The Young Offenders, was commissioned by the BBC with RTÉ as the junior co-production partner.

The Irish and British screen industries have long been interlinked, but the ratio of UK-commissioned representations of Irish culture on TV to Republic-commissioned ones seems like an odd and uncomfortable reflection of how under-resourced the industry is in this State.

The one non-soap, English-language drama commissioned by an Irish broadcaster (though not an Irish-owned one) on air this autumn is the six-part gangland series Darklands, which began on Monday on Virgin Media One, with support from Screen Ireland and the Broadcasting Authority of Ireland (BAI).

Enter the Americans. At present, Netflix’s only commission from an Irish production company (publicly announced anyway) is the animated film My Father’s Dragon from Cartoon Saloon. But the streamer’s unprecedented content spending levels, combined with various provisions of a new EU directive, means that this pipeline could well thicken in future. Irish creative talent will be hoping it does.

Irish broadcasters, however, rather than finding new partners, risk being further cut out of the loop.

Other countries, watching screen media revenues flow inexorably to the west coast of the US, have figured out how to reverse the trend. Even here, as 2019 draws to a close, Screen Ireland and the BAI are both eyeing control of an as-yet theoretical new content fund that would be generated by levies on international companies, including those the Taoiseach met last month.

Did Leo mention the “levy” word to his friends in LA? Hmm. Maybe not right after shaking hands.