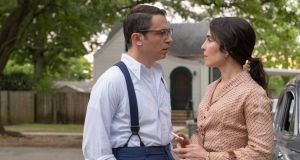 Noomi Rapace (right) and Chris Messina star in revenge drama The Secrets We Keep, one of 30 Sky Original films this year.

Sky has stepped up its investment in film and scripted television production as it seeks to lessen its reliance on key deals with rivals in the fiercely competitive home entertainment market.

The European pay-TV company, which also owns streaming service Now TV, is launching on Monday a 2021 line-up that includes 30 new Sky Original films for Sky Cinema subscribers, with a plan to scale up to one release a week in 2022.

It said it would show 50 per cent more original programming this year compared to 2020, having ramped up activity after a “virtual stop” in production during the first months of the pandemic. The Deirdre O’Kane Show, the postponed Sky One stand-up comedy series commissioned from Dublin-based Kite Entertainment, has been rescheduled to film at the Olympia Theatre in May and it is hoped it will be on air this autumn.

Zai Bennett, managing director of content for Sky UK & Ireland, said Sky production activity had been “back up and running” at capacity under new protocols in recent months, but positive cases had led to stoppages.

“Everything takes a little bit longer and costs a bit more money, because you have a whole load of processes to go through. Also because we have really rigorous testing, that has resulted in people testing positive, which means shows have had to be delayed,” he said.

Sky, which is owned by US telecoms giant Comcast and employs about 1,000 people in Dublin, is now “going even faster than we had planned” on Sky Original films, “to make sure our customers have something exclusive and new that they can’t get anywhere else”, he said. Its move to release one a week in 2022 follows Netflix’s announcement that it will add at least 70 films on its platform this year.

“It is a very hot market. It is very competitive,” Mr Bennett said. However, the pandemic has boosted consumption of its content, with double-digit growth at both the Sky entertainment channels he oversees and Sky Cinema.

“The thing that is really heartening is that the pie has got bigger, so everyone’s viewing has gone up, but our share of the pie has also got bigger.”

The increase in investment by Sky – which also includes the construction of Sky Studios Elstree in north London – comes amid speculation that US network HBO will eventually seek to expand streaming service HBO Max across Europe rather than renew its long-established programming deal with Sky.

“We want to own our own future. We don’t want to be beholden to lots of other companies to supply us with things, so commissioning things and originating them gives us a lot more surety about the way we’re going as a business,” Mr Bennett said.

Sky’s documentary offerings include the recently announced Murder at the Cottage, a series by Oscar nominee Jim Sheridan examining the 1996 murder of Sophie Toscan du Plantier. Netflix is separately making a documentary series about the case.

Bafta-winning actor Fiona Shaw is among the Irish talent involved in the starry 2021 roster of Sky Original films, appearing in psychological thriller Kindred, while Colm Meaney features in the supporting cast of Save the Cinema, about a real-life campaign to stop a local cinema being demolished.

Cinemas’ pandemic woes have had a mixed impact on Sky. While their closure throughout much of 2020 has interrupted the supply of films to Sky Cinema, the willingness of some studios – notably Warner Bros – to make titles available on premium video-on-demand (PVOD) just weeks after their truncated big-screen release has meant Sky has been able to offer blockbusters like Wonder Woman 1984 for rent through Sky Store Premiere much earlier than normal.

“We want a thriving exhibition sector, we want people going to the cinema. Going to the cinema is great, and it makes films famous, which is brilliant because then people have something that they really want to see on Sky Cinema later on,” Mr Bennett said.

“But we also want to embrace choice for people,” he added. “Hopefully when cinemas are open again, this model can continue to some degree, where films can be available in the cinema and then quickly on some kind of rental platform.”