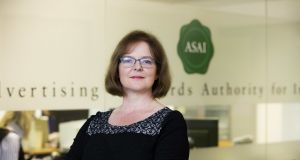 ASAI chief executive Orla Twomey engagement and compliance showed advertisers were “completely on board” with its bid to ensure the highest standards.

Complaints to the Advertising Standards Authority for Ireland (ASAI) rose 10 per cent last year to 1,858, according to the industry’s self-regulation body.

The complaints related to 1,360 different advertisements, with this number up 15 per cent on 2018.

The ASAI found that a total of 105 ads were in breach of its code of standards in 2019, up from 72 the year before, its annual report said.

High-profile advertisers that failed to comply with the code included bookmaker Paddy Power, with six complaints upheld against an “anti-English” advertisement that ran ahead of the Ireland v England in Dublin during the 2019 Six Nations. The ASAI also agreed with a complaint taken by Aer Lingus against a 2018 Ryanair ad in which the airline claimed it was “number one for punctuality”.

The health and beauty sector attracted 229 complaints, the most for any sector. This was followed by 172 complaints about leisure sector ads and 169 in relation to travel and holidays.

Motoring, which attracted 161 complaints, and telecommunications, which drew 139 complaints, were the next biggest triggers for complaints to the organisation.

About two-thirds of complaints alleged that the advertisement in question was misleading, while 7 per cent were made on the basis that the ad was offensive. Others cited concerns with areas such as alcohol advertising, environmental claims, gambling and employment advertising.

Digital media, the biggest sector within the ad market, gave rise to 48 per cent of complaints in 2019. This share has swollen from just 22 per cent back in 2010, when online advertising was still a nascent business compared with its size today.

ASAI chairman Sean O’Meara called for more support from this sector, saying it was “imperative” that its aim of providing consumer protection was properly funded.

“While the ASAI has strong support from all traditional media in Ireland, we urge digital organisations to engage both from a compliance and funding point of view,” he said.

ASAI chief executive Orla Twomey said the overall engagement with the body and compliance with the verdicts of its independent complaints committee showed advertisers were “completely on board” with the ASAI in its bid to ensure the highest standards of advertising and marketing.

The ASAI offers advertisers, agencies, media and promoters a free copy advice service on whether a proposed ad or promotion conforms to its code of standards. It received 139 requests for this service in 2019, up 10 per cent.

1 ‘My rent here is so low it’s a joke’
2 Majority of employees don’t want to return to pre-Covid working patterns
3 Varadkar and Donohoe to meet banks to discuss mortgage breaks
4 Tobacco giant’s menthol-ban substitutes take 5% share of Irish market
5 If tourists are such pariahs should we not be testing them on arrival?
6 ‘I set up an investment club many years ago with a bunch of friends’
7 Goodbody’s planned €155m sale to Bank of China falls through
8 Bank of China confirms deal to take over Goodbody Stockbrokers
9 BrainWaveBank raises €1.2m for its ‘Fitbit for the brain’ technology
10 Paying off your mortgage in full not always the best plan
Real news has value SUBSCRIBE

Homeworking is depriving me of juicy gossip 05:30
Companies cutting IT investment when they need it most, warns PwC report 05:30
‘I set up an investment club many years ago with a bunch of friends’ 05:20
Tobacco giant’s menthol-ban substitutes take 5% share of Irish market 05:11
Investors in Irish solar energy fund in line for €20m payout 05:00
Search executive
jobs on irishtimes.com