Broadcaster recorded loss of €13m in 2018, citing the cost of ‘special events’ 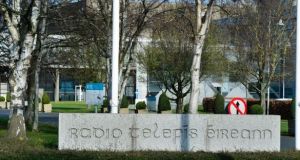 Two of the pieces, by Louis le Brocquy, were commissioned by the State-owned public broadcaster in 1966 (Táin) and 2000 (The Massing of the Armies).

RTÉ has confirmed it has decided to sell five of its artworks at public auctions next month and that proceeds from the sale will be “reinvested in the organisation”.

Two of the pieces, by Louis le Brocquy, were commissioned by the State-owned public broadcaster in 1966 (Táin) and 2000 (The Massing of the Armies).

The other artworks include Symphony Orchestra (1969) by George Campbell, Inscape Mozaga (1996) by Tony O’Malley and Abstract Painting (1967) by William Scott. The pieces will be sold through Sotheby’s at public auction in November.

RTÉ recorded a loss of €13 million in 2018, with the broadcaster citing the cost of “special events”, such as the Papal visit, the presidential election and its coverage of the FIFA World Cup.

1 Nine more suing INM and Leslie Buckley over alleged data hacking
2 You now get almost nothing for your money . . . but it could be worse
3 Home or car: what’s the best use of my savings?
4 Restaurants file court actions against insurers over lockdown losses
5 VAT cuts are for businesses – consumers will still pay the same
6 How to further divide the economy using the wage subsidy
7 ‘The rental situation stops me moving back home’
8 Brexit: System agreed for Irish goods to skip checks on UK trade
9 Could your old car be giving away all your secrets to its new owner?
10 Why are markets booming when a crash is on the way?
Real news has value SUBSCRIBE