Repeats, but not much recovery, in sight for RTÉ

Public service broadcaster says it will ‘reshape’, but Government must play its part 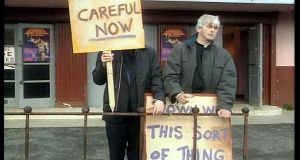 On repeat: ‘Father Ted’ is regularly repeated in peak-time slots on RTÉ2 because budgets for original programming on the channel are low.

RTÉ is no stranger to repeats at this time of year. One of its most reliable summer repeats is the one where its annual report emerges with an unfortunate headline number – such as the €19.7 million deficit it recorded in 2016. RTÉ has now made a loss in six of the last eight years.

Recession was to blame for its earlier series of plunges into the red. This time, the problem feels more fundamental.

The broadcaster’s costs in 2016 increased €23 million to a total of €343.4 million, which includes expenses incurred by covering “special events”. This exceeded its total revenues of €337.3 million (with depreciation and amortisation costs of €13.6 million accounting for the rest of the deficit).

RTÉ’s commercial revenues remain 36 per cent or some €87 million lower than they were at their 2007 peak. Its licence fee income has declined 11 per cent or by €22 million since 2008.

As things stand, it is hard to see enough of a “recovery” in either source of funding to maintain RTÉ as the Irish public know it. Some people will say that is a good thing – they will make the “why do we need RTÉ when we have Netflix?” argument. Meanwhile, some 9 per cent of homes report that they do not own a television. The market is not just changing. It has changed.

Yet people complain about those repeats. They have expectations of something more from RTÉ. That must mean that at some level they value the concept of RTÉ and Irish culture. Wouldn’t a country with even less home-made programming than Ireland currently produces be a little weird?

Director-general Dee Forbes has been keen to stress the responsibilities of the Government to reform public service funding. Indeed, she says her primary focus in the coming years is to galvanise support for the very concept of public service media.

The months ahead will also reveal how much RTÉ is willing to do to help itself. Forbes has teased out some details of her plans to “reshape” RTÉ at the top from October, while necessary slimming down of the organisation will occur through voluntary redundancies and more external commissioning. The physical footprint at Donnybrook is not the only part of RTÉ that is set to shrink.

Of course, RTÉ has an advantage other media organisations do not – its €179 million in public funding is “a very helpful start to any financial year”, as Virgin Media Ireland chief executive Tony Hanway put it.

But RTÉ is at a disadvantage compared to many of its competitors: it is not a global business. It is obligated by legislation to perform numerous tasks that commercial operators would never dream of doing in a market of this scale.

It is those very things that other companies don’t and won’t do that the audience will miss – and are already missing – if RTÉ is treated by the Government as some awkward quango that it can alternatively bash or ignore.

1 Aer Lingus confirms job cuts due to ‘decimation in demand’
2 Major credit union plans to limit savings accounts to €40,000
3 Passengers face queuing in car parks at Dublin Airport
4 Why is Germany suddenly embracing its inner Keynesian?
5 In six months we will be in the grip of a 1980s-style recession
6 Ikea among major retailers to reopen next week
7 Domestic economy may get boost from multinationals
8 Penneys will not reopen on Monday despite expected changes to lockdown rules
9 AstraZeneca targets two billion doses of coronavirus vaccine
10 Student accommodation sector set for harsh Covid-19 lesson
Real news has value SUBSCRIBE